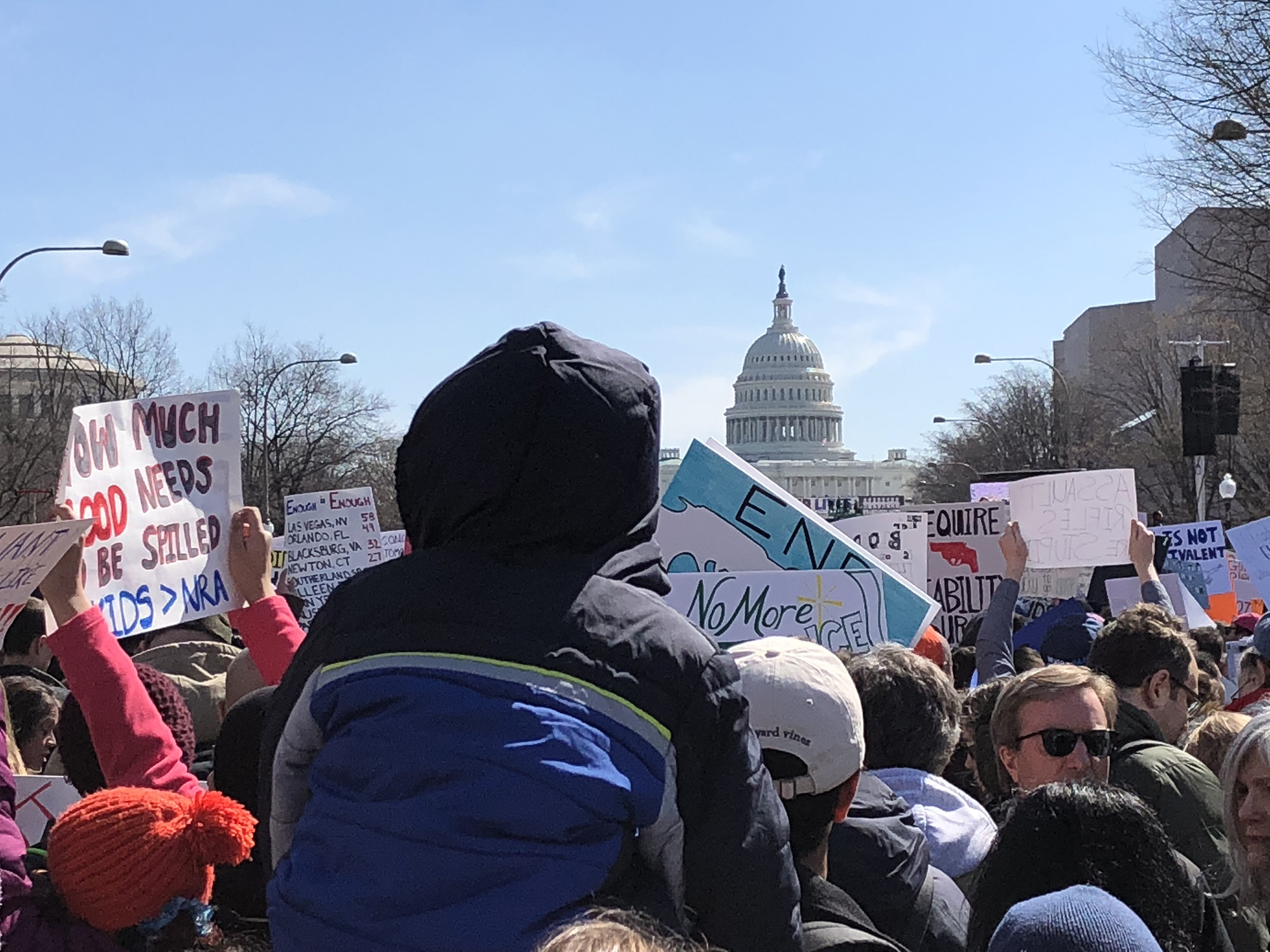 Equal parts of grief and hope came together at The March For Our Lives in Washington, D.C., and echoed in towns and cities across the country. An estimated 200,000 people gathered on Pennsylvania Avenue on March 24 to honor and remember the victims of the high school shooting in Parkland, FL, while vowing to change the laws and the lawmakers who support the gun culture.

As speaker after speaker in D.C. described their personal experiences with gun violence, they also laid out a roadmap to stop the violence by changing the politicians who block meaningful gun control. Refusing to be silenced any longer, the speakers hoped for a safer future, and their hope was reflected in the crowd.

“I believe and am hoping for change and it starts with my voice,” explained Julia Lewis. Lewis, 15,  traveled to the march in D.C. from Lexington

with 17 teenagers from the Diocese of Kentucky.

For Carol Schexnayder, who’s marched for various progressive causes since 1991, this time seemed different. “With so many young people the atmosphere is energized,” said Shexnayder, a retired teacher. “With so many people here this may work.”

The mood shifted from somber, as story after story illustrated the violence and loss teenagers have had to face, to joyful, as the crowd chanted “Vote Them Out” and “No More.” The group chant moved through the crowd from the grandstand at 3rd Street and Pennsylvania Avenue down to 12th Street and beyond, like a spectator wave moves through a stadium. The crowd was diverse as “Nanas for Gun Control” marched alongside “Vets to End Gun Violence” and “Gays Against Guns,” but it within all the diversity, community and camaraderie set the tone.

As April Breslaw, a 56 year old activist from McLean, describes, “The 2016 elections were alienating, I felt like I didn’t know my country. These marches reinforce that there is a community of good people, sincere people who share progressive and positive values.”

Marches on Washington are nothing new for Ned and Sandy McClurg, who traveled from Chapel Hill, N.C., and have been marching since the Vietnam War. They came to D.C. to join their grandchildren at the march. “We’ve got to be at this march,” Sandy explained, “things have never been worse, so we came to keep trying to make things change.”

Ned McClurg was particularly excited about the kids who had organized the event and those who were marching. McClurg, 72, feels young people have always led the way from the Revolutionary War to the Vietnam war. “They haven’t been screwed up yet and tied down by the pressure of everyday life,” he explained. “Young people are the spiritual leaders– they start the protests that lead to change. Just look at (Alexander) Hamilton.”

McClurg may have a point. Hamilton was 19 years old in 1776. With speakers as young as 11 years old, it looks like youth is again giving political activism new life.  For more on the march, see photo essay.

Stephanie Sedgwick is a member of the Dranesville District Democratic  Committee and Virginia Democracy Forward. A former columnist and recipe editor forThe Washington Post, she now writes a weekly column for mylittlebird.com