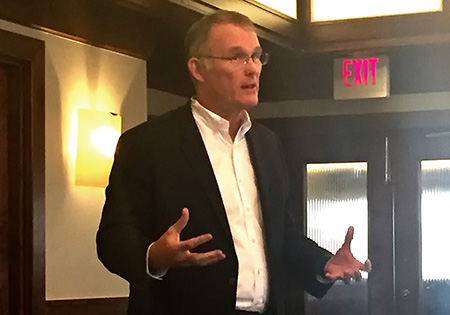 The outlook was dismal when Terry McAuliffe assumed office in 2014 as Virginia’s governor. A federal government shutdown, coupled with budget sequestration, meant big trouble for the state that receives more federal dollars than any other.

Paul Reagan, who served as McAuliffe’s chief of staff during the entire four-year administration, remembers the sense of urgency as the new team began hunting for other economic drivers to lessen dependence on the federal government.

Fortunately, Gov. McAuliffe had extensive national and international contacts as a business executive and former chairman of the Democratic National Committee, which he used energetically to source potential businesses that could locate to Virginia.

The administration also adeptly scooped up investment that left or avoided North Carolina over its infamous   “bathroom bill” aimed at transgender students. McAuliffe’s ability to veto divisive social legislation demonstrated that Virginia, by contrast with its southern neighbor, was open and inclusive.

By the end of the term, statewide unemployment had dropped from 5.4% to 3.7%, validating the governor’s economic vision.

Reagan looked back on his four momentous years with McAuliffe at the monthly breakfast meeting of Dulles Area Democrats (DAD) on March 19.  A native of the Dulles Area—Reagan grew up in Reston and graduated from Herndon High School—he continues to work with Gov. McAuliffe, and previously for Sen. Jim Webb, Rep. Jim Moran, and Gov. Mark Warner.

DAD is a grassroots organization formed in 2006 bringing together the western Fairfax and eastern Loudoun democratic communities. DAD hosts monthly breakfast meetings on the third Monday of the month at the Amphora Diner in Herndon, and has a PAC to support local candidates.

For more information on DAD, find us on Facebook, or email allisondickert@gmail.com.

Allison Dickert Madson  is the Secretary/Treasurer of DAD and currently manages regulatory affairs for a medical society. Previously she managed the campaign of Va. Del. Ken Plum.