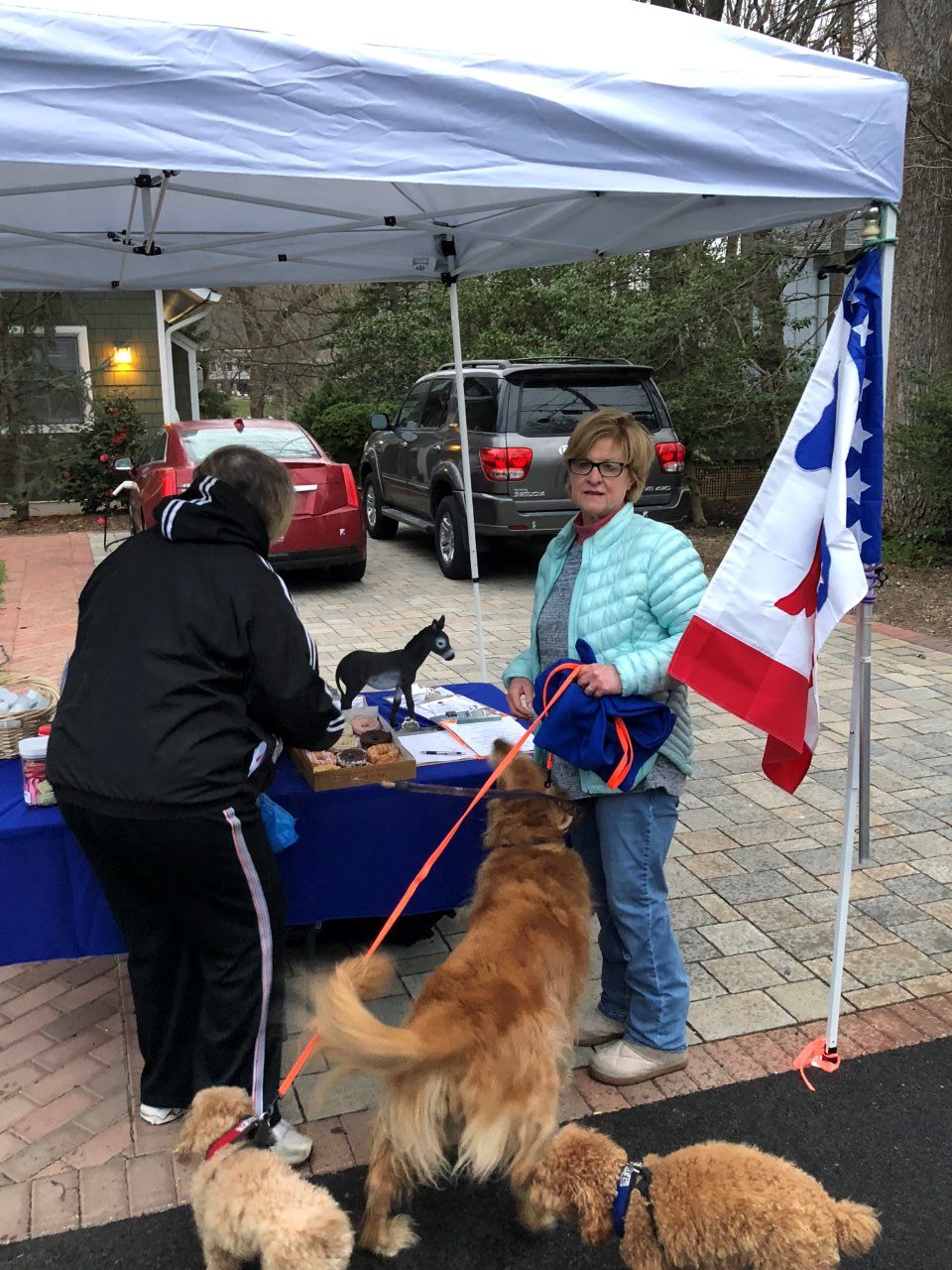 Wouldn’t it be great to just sit at home and have voters come knocking asking how they might get more actively involved instead of you volunteering with a list and a clip board and going door-to-door?

One early morning this winter I realized that many of my neighbors do walk by my door every day, rain or shine. And I thought that if I offered them a cup of coffee and a doughnut, they might stop for a conversation about what our Democratic Party is doing. They are the dog walkers. And they’re in every neighborhood in Fairfax County.

I sent a postcard asking “Are you a blue dog, yellow dog, any dog Democrat, and will you be walking him this weekend?” to a sorted list of likely  voters asking them to stop by my curb on Saturday while walking their dog and I’d have a hot cup of coffee, doughnut dog biscuit, and a flyer on Mason District Democratic Committee activities and how they might get involved.

I included a variety of options from a casual BBQ , to a Mason District monthly meeting, writing for The Blue View, phone banking and a Kaye Kory fundraiser. The plan had a few glitches including the Post Office failing to deliver many of the postcards on time even though I mailed them the Monday before. I also didn’t account for the sleeting rain and snow on an early April morning. Luckily I have a pop-up canopy.

The number of people who stopped by from 7-9 AM was low, but I had great discussions with each. One woman had moved into the neighborhood several years ago and just never got around to getting involved. She (and her dog) were anxious to hear more and she’s already said she’d like to attend some events.

I wouldn’t call the project a rousing success but I think I’ll try it again. I’m not sure I need the effort and expense of the postcards. Just setting up a table (with a blue table cloth, party flag, a braying donkey from E-bay and flyers I picked up at the Fairfax County Democratic Committee meeting the week before) and offering coffee as people walk by will draw interest. I also think as the weather warms and the political races heat up (and my neighbors know why I’m there) they’ll appreciate a soft sell on engagement and a reminder about how they can help.

The project has promise but it needs some refinement and a few more tests. If anyone would like to experiment with it in your neighborhood, please let me know how it goes: .hollyhazardva@gmail.com

Holly Hazard is is a member of Mason District Democratic Committee and is on The Blue View Staff.