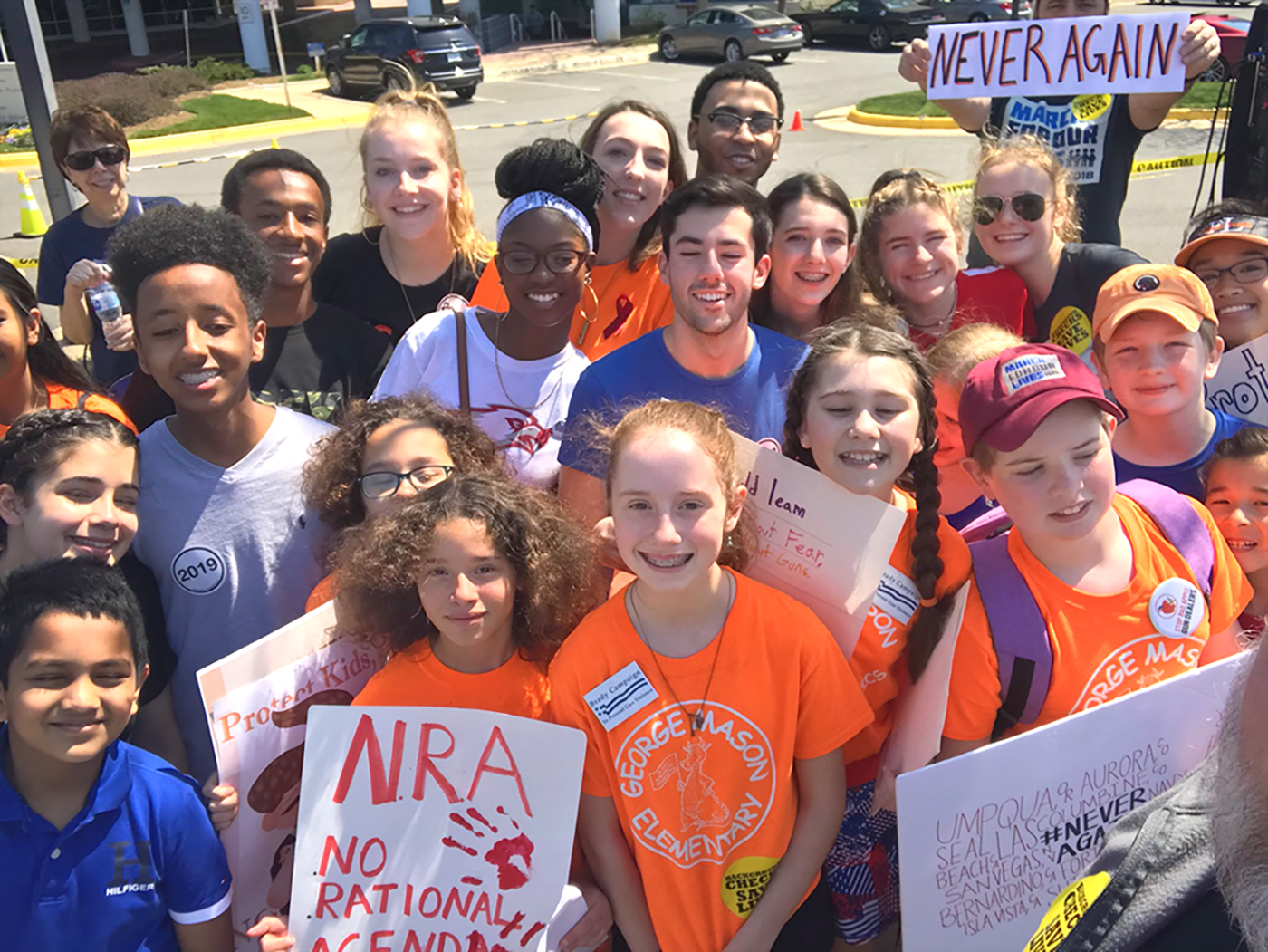 Jenny Wadhwa, a survivor of the Sandy Hook Elementary School shooting in 2012, likened the tragedy to the Holocaust and vowed,  “We will never forget”.

Aalayah Eastmond, a survivor of the Marjorie Stoneman Douglas High School shooting in March, also pointed out the parallel. Ironically, when the shooter entered her classroom they were studying the history of the Holocaust, she said.

In addition, some protesters at the monthly event had a personal history of gun violence. Alice Englert came from Warrenton to honor her grand-cousin, Daniel Barden, who was a Sandy Hook victim. Phyllis Klein’s son was a senior at Virginia Tech during the shooting in 2007. With each following incident she finds the nightmare continuing, and getting worse. This was her first protest, but she plans to make it regular event.

Many of the activists, who gather on the 14th of every month in front of the NRA, have been advocating for gun control for years. Dorothy Pech of Vienna began protesting against gun violence with the Million Mom March 18 years ago. After all this time she remains hopeful, especially with the new participation of the young people. “They give me the chills, they’re so wonderful.” In her 80’s she’s not ready to give up, explaining that nothing will happen if we don’t keep trying.

One of those young people, Matt Post, a high school senior from Montgomery County, stirred the crowd as he predicted that a student-led movement “will break the coma of inaction and become the moral conscience of the nation. The people will hear us on November 6, 2018.”

The youngest speakers were 5th graders from George Mason Elementary School in Alexandria. Veterans of the March for the Our Lives, a protest at the White House and a walk-out at their school, the young activists each spelled at their name so they too would not be forgotten.

Local politicians who are veterans in the fight for gun reform joined the crowd. Virginia Del. Ken Plum (D- 36) is a regular attendee at the monthly protests. “We will not forget,” he claimed. Del.  Kathleen Murphy (D-34) spoke of the fears of terrorized parents, who have become afraid to send their kids to school. “Parents put their kids on the buses in the morning expecting they will return home safely.”

No one at the event expected reform to be easy. As Richard Chew explained, “we have to keep whittling away as it.” Del. Plum, the longest-serving delegate in the House, knows that some jobs take longer than others. “Common sense gun reform is one of the long ones, but we must insist on it.”

For more information on the monthly vigils, click here.

Photo above story is of  5th graders from George Mason Elementary School in Alexandria and other area students attending the vigil at NRA Headquarters in Fairfax, VA.