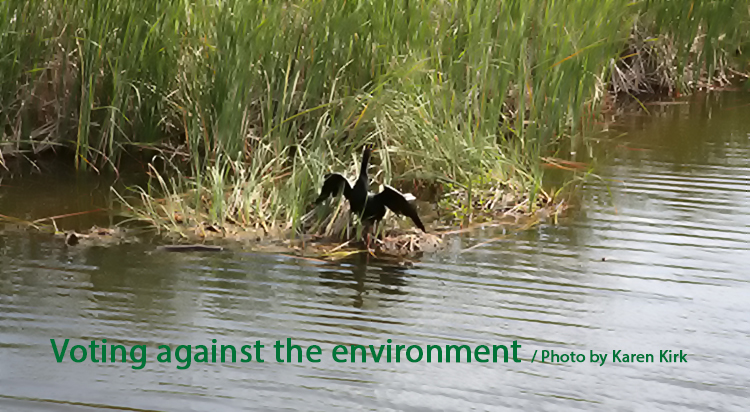 In light of  Earth Day on April 22, it is hard for me to enter the mind of a Congress member whose voting score on the environment is barely above zero – especially when her colleagues in neighboring districts have records close to 100%.

You know who I am talking about. The League of Conservation Voters, a fact-based, responsible environmental watchdog, tallies lifetime voting records of our Northern Virginia Congress members as follows:

Why does a legislator vote consistently against common sense measures to protect our air, water, soil, climate and natural resources? It’s not rational.

Everyone knows – and some of us remember – that before the Environmental Protection Agency was created in 1970, America’s air and water were toxic in many locations, and getting worse everywhere.

Everyone knows that businesses only invest in curbing pollution because of regulation. Without regulation, businesses that voluntarily invested would have to pass the costs on to their customers, and they would be undercut by competitors who decided not to make these investments.

Only regulation can level the playing field, create cost-sharing and drive down pollution levels. Without government action we have  “the tragedy of the commons” in which independent action collectively destroys common resources.

I say this as a true capitalist, who makes his living through private equity investment.

The only logic in voting against the environment is that you depend on your political opponents to do the right thing, while you enjoy the support of self-interested polluting industries.

There’s a word for that: cynical. And another word, given that we are talking about health and survival: immoral.

I asked our NoVa Congressional representatives for comments on their LCV scores. Their responses bear careful consideration:

“Environmentalism wasn’t always a partisan issue, nor should it be. The EPA was created by a Republican but today’s House GOP would rather pretend climate change didn’t exist. We need leaders who are willing to act on climate change.”

“Northern Virginians are deeply concerned with the direction of the country on the environment under Donald Trump and Scott Pruitt. I believe that this will be a powerful motivator for voters in our region in midterm elections this fall.”

Rep. Comstock’s silence speaks louder than her colleagues’ words. But our voices must be louder still as we take action this November to give VA 10 a representative with courage and integrity to carry out government’s necessary role in protecting common resources.