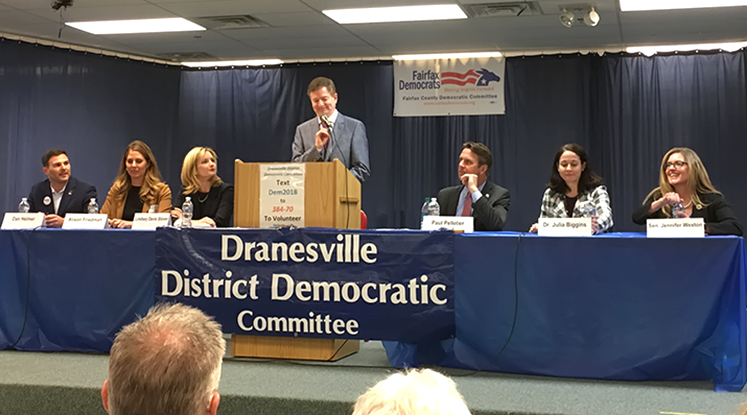 The forum was hosted by the Dranesville Democratic Committee and moderated by Washington
Post political fact checker and columnist Glenn Kessler. The six candidates took turns
answering questions posed by Kessler that touched on many of the most topical issues of the
race. The crowd numbered close to 400 and were joined by several local democratic officials
including state delegates Jennifer Boysko (D-86), Rip Sullivan (D-48), Marcus Simon (D-53) and
Kathleen Murphy (D-34), Fairfax County supervisor John Foust of Dranesville District and state
senator Barbara Favola (D-31).

The first questions centered around healthcare. Kessler pointed out that the original Affordable Care Act was a
law that needed improvement, and that the individual mandate was always weak, even before
the tax bill weakened it further. He asked the candidates what they would do about it.

Dan Helmer, a West Point grad, former Rhodes scholar and business consultant, who has had
guaranteed healthcare most of his adult life as a member of the military, went beyond
commenting on the individual mandate. “I believe in the richest country in the world, every
American should have the healthcare I do.” He supports a Medicare for all option with a means-
adjusted premium.

Julia Biggins, an infectious disease scientist, while acknowledging that it won’t be easy,
advocated a single payer plan. “We need to shoot for the moon.”

The next question turned the focus to Social Security and the looming funding crisis. Kessler
asked the candidates how they would go about fully funding the program. Jennifer Wexton, the
Virginia state senator from the 33rd district, suggested that raising the income caps would be an
easy way to make it stable in the long term.

Paul Pelletier, a former federal prosecutor, pointed out that Social Security is not an
entitlements program, despite Republican attempts to label it as one. He explained that Social
Security is funded by taxpayer contributions.

Moving to foreign policy, the discussion centered on Iran’s conduct since the nuclear ban treaty
was signed. Citing claims that Iran has profited since the lifting of sanctions and that some of
that money has been used to fund violence in the Middle East, Kessler asked the candidates
how the U.S. should react.

Lindsey Davis Stover, who served as a chief of staff on Capitol Hill and served in the Obama
administration, argued that we can’t undermine the Iran deal, stressing the importance of
America staying true to its commitments.

Alison Friedman, a former senior state department official in the Obama Administration,
explained that Iran is a human rights violator who under no circumstances should be allowed to
get a nuclear weapon. She advocates making sure we uphold the role of diplomacy, the Iran
deal and hold Russia accountable for its actions with Iran.

The tax reform bill was next, with a question about whether the sunset provisions on tax cuts for
the middle class should be repealed, and it drew a lively response. Helmer voiced his belief that
the bill doesn’t need to be revised; rather, it needs to be repealed and replaced with a new tax
law.

Stover stated that she would never have voted for the law.

Barbara Comstock wasn’t one of the participants, but she was the subject of some harsh
criticism. Wexton pointed to Comstock’s role as an accomplice to the lax regulation of social
media and data-mining. Friedman called Comstock out for failing to deliver on her promise to
protect the healthcare of her constituents.

The one heated exchange came between Helmer and Wexton. Helmer said there was one
candidate who had voted for legislation that had expanded gun rights. Kessler broke from the
format to allow Wexton, the apparent target of Helmer’s comment, to respond. As a state
senator, Wexton voted for bills that revised concealed carry laws and for a 2016 bill supported
by then Gov. McAuliffe that took guns away from domestic abusers. Wexton said that she has
never taken a donation from the gun lobby, has a failing grade from the NRA and that as a
result of a provision in the 2016 bill, there is now a state trooper available at every gun show in
the state to run background checks.

The forum ended with each candidate describing his or her unique advantage against Comstock.

Friedman spoke of her strength in raising the funds that will be needed to counter Comstock’s
war chest.

Helmer pointed to the success of veterans like him, citing Conor Lamb’s victory in a special
election for Pennsylvania’s 18 th Congressional District.

Stover attacked Comstock’s voting record as unrepresentative of her constituents.

Biggins, who would be the first female scientist in the House if elected, said Congress should
look more like our communities, with people from a variety of backgrounds.

Wexton said that she has shown that she can run and win, has deep roots in Loudoun County
and the surrounding areas, and has the support of many public officials including Gov. Ralph
Northam, Sup.Foust and other delegates attending the forum.

Pelletier stressed his experience and pledged that if elected he would tell the truth, fight for his
constituents and never back down.

In the end whoever wins will likely face a tough fight from Comstock, a seasoned campaigner
with a big war chest. But Democrats nationwide have targeted this seat as winnable, and are
counting on volunteer enthusiasm to canvass and turn out the vote. As Del. Boysko
commented, “I can’t go anywhere in the 10th where people don’t say Comstock has to go.”

Stephanie Witt Sedgwick is a member of the Dranesville District Democratic
Committee and Virginia Democracy Forward. A former columnist and recipe editor for The Washington Post, she now writes a weekly column for mylittlebird.com.