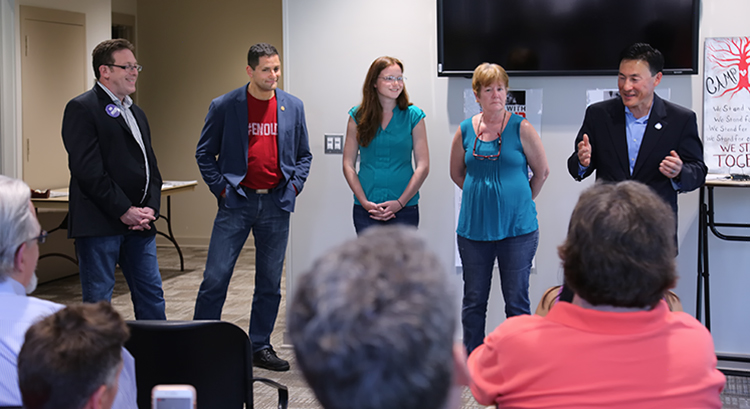 After spending 34 days living in trees to block the Mountain Valley Pipeline from being built on their property in Roanoke County, Red Terry and her daughter Minor are taking their fight around Virginia this week. They were joined by Virginia Delegate Mark Keam, 35th District, Delegate Sam Rasoul, 11th District and attorney and activist Jonathan Sokolow at a briefing to the public in Fairfax County on Wednesday.

“Today we want you all to understand a major environmental crisis is happening and it is becoming more of a threat every single day and we want you to understand what you can do about it,” said Keam at the event at Northern Virginia Community College.

“I am joined by experts who know this issue really, really well and have been fighting this issue for a long time,” Kean said. “Even though a few of us are late to the game we are joining them so that we can add and amplify the work that they’ve already been doing and now with more boots on the ground and more cavalry coming to join their army, we want to show that this effort is moving bigger, stronger and faster and this is going to end only when we accomplish what we want, which is to stop the pipelines.”

The Terrys came down from their trees on Saturday, May 5, after a judge ordered them down by midnight or face fines of $1,000 a day.

“I went up there because our voices weren’t being heard,” said Minor Terry. “After following all of the rules and bringing in our own scientists and doing everything we were supposed to do and not getting anywhere, I just decided no, I’m going to live in a tree. And that’s what I did and it turns out little old me turns out to be a giant pain to MVP.”

Red Terry, whose husband’s family has owned the land on Bent Mountain for seven generations, said, “I kept seeing how MVP was treating my husband and his three siblings, our neighbors and all of our friends, steamrolling over all of us. They decided they need everybody’s land to make money. They decided to take it and government was letting them. FERC said go ahead.”

“Out of our 400 acres they decided to go through both sides of our property next to our house, and cross our creek 23 times, she said. “They left off creeks, streams, brooks and wetlands from their maps. They said they didn’t have manpower to monitor building water crossings.”

Rasoul, whose district includes Roanoke, explained that although the Federal Energy Regulatory Commission (FERC) has the authority do decide whether or not natural gas pipelines are needed, the state has the authority to prevent them, based on the affects to water quality. The MPV is going to affect 1,100 different bodies of water in Virginia and the state can say no under section 401 of the Clean Water Act, Rasoul said.

New York just stopped a pipeline a couple of weeks ago, setting a precedent, Rasoul said. Lawyers for the pipeline company appealed to Supreme Court, which declined to hear the case.

Sokolow said in section 401 of the Clean Water Act states that if you’re going to build a gas pipeline such as this you need to have the body in the state certify that it complies with state water quality standards. “Virginia has its own water quality standards and if you can’t get that certification, you can’t build the pipeline,” he said. “This is what happened in New York.”

The Atlantic Coast Pipeline and the MVP were approved when President Trump, who said he wanted immediate approval of the pipelines, appointed two Republican members to join Cheryl LaFleur on FERC, Sokolow said. LaFleur, the only Democrat, dissented, saying these pipelines serve no public good. Sen. Tim Kaine has now demanded FERC have a rehearing on the pipelines because FERC now has five members.

Sokolow said he walked Bottom Creek on the Terrys’ property, which is classified as a Tier 3 stream, which the Virginia Department of Environmental Quality defines as Exceptional State Waters and is fully protected under Virginia law. He said MVP placed Limits of Disturbance markers, which he called line of destruction markers, less than 10 feet away from the creek.

The audience was urged to get involved with the many groups including grassroots organizations that are trying to stop the pipeline.

Karen Kirk, Deputy Editor and Photo Editor of The Blue View, is a retired journalist.