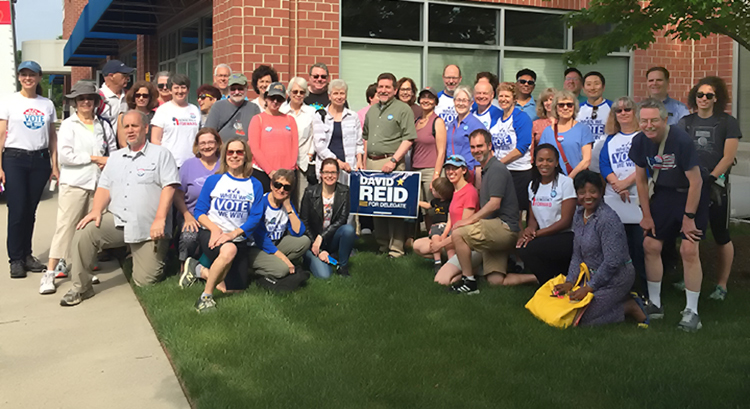 Fifty-plus canvassers gathered early Saturday at a bare bones campaign office in Ashburn. Their task: canvass their assigned neighborhoods looking for unidentified Democrats and finding out what issues mattered to them. It’s all part of a broad voter identification program going on throughout Virginia’s 10th Congressional District. The goal is to find the new voters who will help beat Barbara Comstock in 2018 and also turn the Virginia Legislature blue in 2019.

While 50+ canvassers is common for the Get-Out-the-Vote (GOTV) efforts that start two weeks before major elections, a crowd this size, months before the election is new. “We always had a good turnout for GOTV, but the difference now is people coming to events like this,” explained Todd Smyth, who had come out from Kingstowne to participate. Smyth is a veteran canvasser, but this is the first year he has seen this kind of event. The data gathered at these canvasses will enable the winner of the CD-10 primary to start on day one with good data on where the voters are and what matters to them.

The canvassers came from all over area. Shirley Tabb, who lives in D.C.,  came with Alexandria Democratic Committee’s Democrats-to-Go group. Tabb, like many of the volunteers, became involved after the 2016. She comes across the river to canvass because, “I like helping you guys.”

Zoya Gleizer was there with a small group from a Swing Left chapter working out of Rockville, Md. The idea of Swing Left is to find your local swing district and go work there. Gleizer lives in a strong democratic area, so coming to Virginia to volunteer gives her the opportunity to do more than complain: “I’m able to do something practical here to help.”

Sri Amudhanar was there representing the Ashburn Democratic Committee. Amudhanar is in his third year as the chair of the committee. When he took over, it was practically a committee of one. In those years, the committee has grown and now has about 30 members at the monthly meetings and a smaller group that meets every single week at a local coffee shop to plan for the upcoming week. He credits Trump for pushing and energizing people to get involved, “People who never would have become involved are now expressing their voices.”

State Delegate David Reid (32nd district) was there to send the group off. Reid knows first-hand the positive effect door-to-door canvassing can have on a campaign. He credits his success in the 2018 election to direct voter interaction. Before the GOTV effort began last fall, Reid’s campaign had knocked on 71,500 doors. Reid had knocked on 8,000 doors himself, but it was the large groups of volunteers from all over the area that allowed for such comprehensive coverage. “It started in November with about 40 to 50 people calling me and showing up asking to help, in December it was 100 and by the end of January we had 300 volunteers. Reid and his campaign manager worked to schedule canvasses with each group. They staged the events out of his house, so the out-of-town canvassers would feel welcome. It worked, Reid won with 59% of the vote.

“At first we thought the surge of volunteers would diminish, like a New Year’s resolution fades away, but it didn’t,” said Reid.

How long the wave of volunteer energy will last is a subject of much speculation. The canvass was being operated out of Kyle Green’s campaign office. Kyle is running in the Democratic primary for state senator, 13th District. Green compares the surge of energy to a wave, and every wave has a crest. The question, as Green sees it, is where will the wave level out. “Hopefully it doesn’t recede to the original level,” said Green, hoping that “when it does regress, we stay at a higher level of sustained energy than we started.”

The photo above the story is of fifty-plus canvassers gathering with Delegate David Reid standing behind a sign left over from his last campaign. / Photo by Stephanie Witt Sedgwick.