A letter sent in 2014 by a child desperately seeking relief for her pain spurred Virginia State Sen. Dave Marsden (D-37th District) to act. The compassion he felt for that child’s suffering from intractable epilepsy started the senator on his four-year journey to assist those in extreme pain.

In 2015, Marsden first sponsored a bill that allowed an “affirmative defense” for the use of medical marijuana oils for the single condition of epilepsy. The Senate voted 37-1 in favor of HB 1445. Then in 2017, he sponsored a bill to provide protection of industries to produce marijuana oil in Virginia, which also passed the Senate. Finally in ground- breaking legislation in the  2018 session, Marsden, his invited Chief Co-Patron, Sen. Siobhan Dunnavant (R-12th District) of the Education and Health Committee, and other legislators, worked to expand the use of medical cannabis oils to any diagnosed condition and to expand the prescribed amount from a 30 to a 90 day supply.

Does that mean it’s now legal to possess marijuana in Virginia? “No, this law doesn’t legalize possession or recreational use,” Marsden said. “It does provide an ‘affirmative defense,’ if you have a medical certificate verifying your medical need for use of the drug. This year a doctor can prescribe it and that creates an affirmative defense.”

Immediate access to medical marijuana oils was made possible by Gov. Ralph Northam’s use of an “emergency clause,” allowing HB1251 to go into effect as soon as it was signed.

The cannabidiol oils and THC-A have anti-inflammatory qualities, among other healing properties, but do not have the same psychoactive effects as THC.

The Commonwealth of Virginia joins other states in recognizing the value of medical cannabis in treating several diagnosed conditions — and becomes one of a few who let the patient’s doctor decide.

That doesn’t mean that cannabidiol oils and tetrahydrocannabinol acid (THC-A oils) will be dispensed from local drug stores. Instead, Virginia has adopted a controlled and “vertically integrated” system. 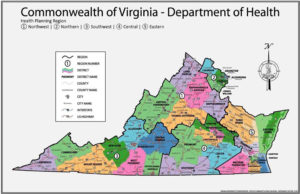 Five medical marijuana oil providers, one in each Health Service Region (Northern, Northwest, Central, Southwest, Eastern), will grow, extract, dispense and deliver the product as licensed pharmaceutical processors, in a structure that has been described as “tight and deliberate.” Free market bidders now are being evaluated by the Virginia Board of Pharmacy to determine their relative ability to comply with regulations established for this system.

Will this be a positive impact to Virginia’s economy as well as a benefit to patients?  “Successful bidders will likely spend $4 million to $5 million on large buildings and provide several jobs in rural areas, where marijuana will be grown and processed inside,” Marsden said. “Application fees, ($10,000 non-refundable for those seeking to be pharmaceutical processors) will support the expense of the Board of Pharmacy staff needed to monitor the system.” Point of sale taxes will go to Virginia.

For more news on the changes to laws and uses, and the quickly changing societal views of marijuana, including Virginia’s, watch NBC’s “Dateline” on Sunday, May 20, on Channel 4.

Susan Laume (pictured) is a member of the Springfield District Democratic Committee and a director of the NoVA Coalition for Animals. With her dog, she works as a therapy dog team.