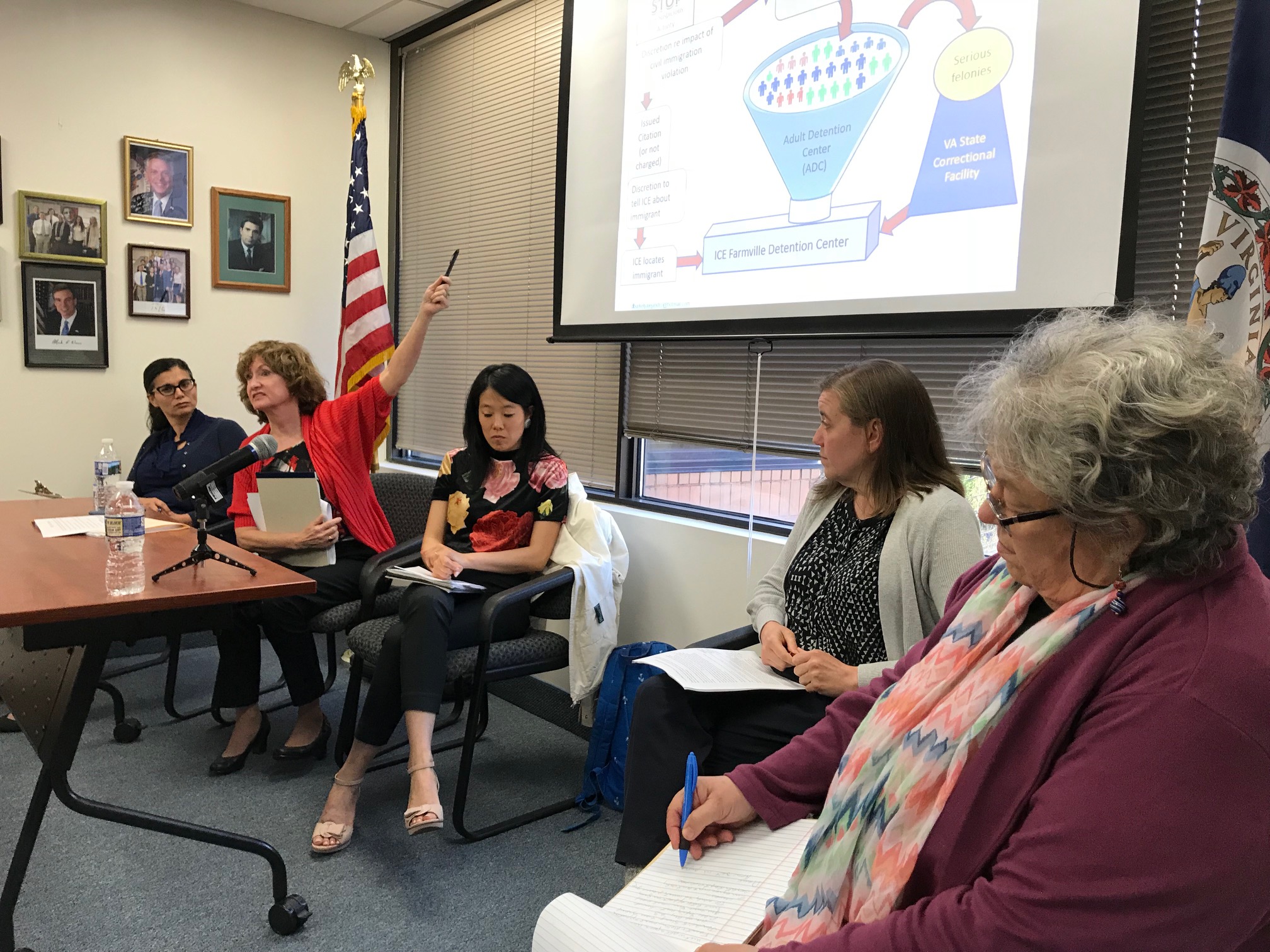 Fairfax County could cut the arrests of undocumented immigrants from its jail by more than 90% by refusing to cooperate with the federal Immigration and Customs Enforcement (ICE), according to a panel of immigration experts who spoke Wednesday night at a public forum.

The experts noted that Fairfax County police and Sheriff’s Office are not legally required to turn over undocumented immigrants to ICE, but cooperate voluntarily. In the vast majority of cases, the immigrants released to ICE were initially arrested for misdemeanors, some as slight as traffic offenses.

The experts said that deportations break up families, increase poverty, and make communities less safe by eroding trust between police and residents. “Our families don’t feel safe whether they are citizens or not,” said Maya Castillo, political director of New Virginia Majority, a Virginia social justice organization.

But Fairfax County could dramatically reduce the damage by passing an ordinance to stop voluntary cooperation with ICE, noted panel members.

According to a study by Migration Policy Institute, when local jails cease giving ICE information on dates and time of release, ICE only tracks down 6% of the immigrants it seeks from local authorities.  However, in Fairfax County, the Sheriff’s Office routinely and voluntarily releases this information to ICE.

Moreover, Fairfax County police frequently arrest immigrants for petty offenses, instead of issuing summons, as they ordinarily would to citizens  – thus putting the immigrant’s information into a database accessible by ICE and leaving them vulnerable to ICE arrest.

The problem is huge and growing. Fairfax County already has the 7th largest number of deportations in the country, said Sookyung Oh, DC Area Director of NAKASEC, an organization of Korean and other Asian Americans for social justice.

Moreover, ICE arrests in Fairfax are rising, noted Diane Burkley Alejandro, lawyer and lead advocate for ACLU People Power, a grassroots organization. In 2016, she said, local law enforcement turned over 271 immigrants to ICE. The next year, that number rose almost three times to 779. Already in the first four months of 2018, 249 immigrants have been released to ICE by local law enforcement, almost twice the rate over the same period last year.

But Ms. Alejandro was hopeful. “It’s easy to think it’s hopeless,” she said, “but you can dramatically reduce the number of arrests by changing local policies.”

Changing policies was the common theme of the 4-member panel. They all asked the audience of about  40 to urge the Fairfax County Board of Supervisors to vote for an ordinance that would stop the police, the Sheriff’s  Office, the public school system and the juvenile detention center from voluntarily cooperating with ICE.

“There’s strength in numbers when talking to elected officials,” noted Mary Supley, immigration issues coordinator for Herndon-Reston Indivisible, a grassroots organization. “It is better to coordinate than duplicate.” She added, “We need elected officials to do what we elected them to do – and we need your help.”

If the supervisors do not take action, she noted, “This needs to be an election issue… In northern Virginia, thankfully, most of our elected officials are Democrats but we still have to hold them accountable.”

The panel was sponsored by Fairfax County Democratic Committee (FCDC) State & Local Affairs Committee (SLAC) and was held at FCDC headquarters in Fairfax. Speaking from the audience, FCDC Chair Dan Lagana summarized the theme of the presentation.  “This is a moral issue. There is a right and wrong to it. What bothers me is that we are criminalizing people for their dreams and aspirations.”

For more information on how to support the proposed ordinance to stop voluntary cooperation with ICE in Fairfax County, contact SLAC Chair Mary Paden or any of the panel members via the links above.

Brad Swanson is the editor of The Blue View and a member of Hunter Mill District Democratic Committee. He is an international investment manager and previously worked as a diplomat and  journalist.