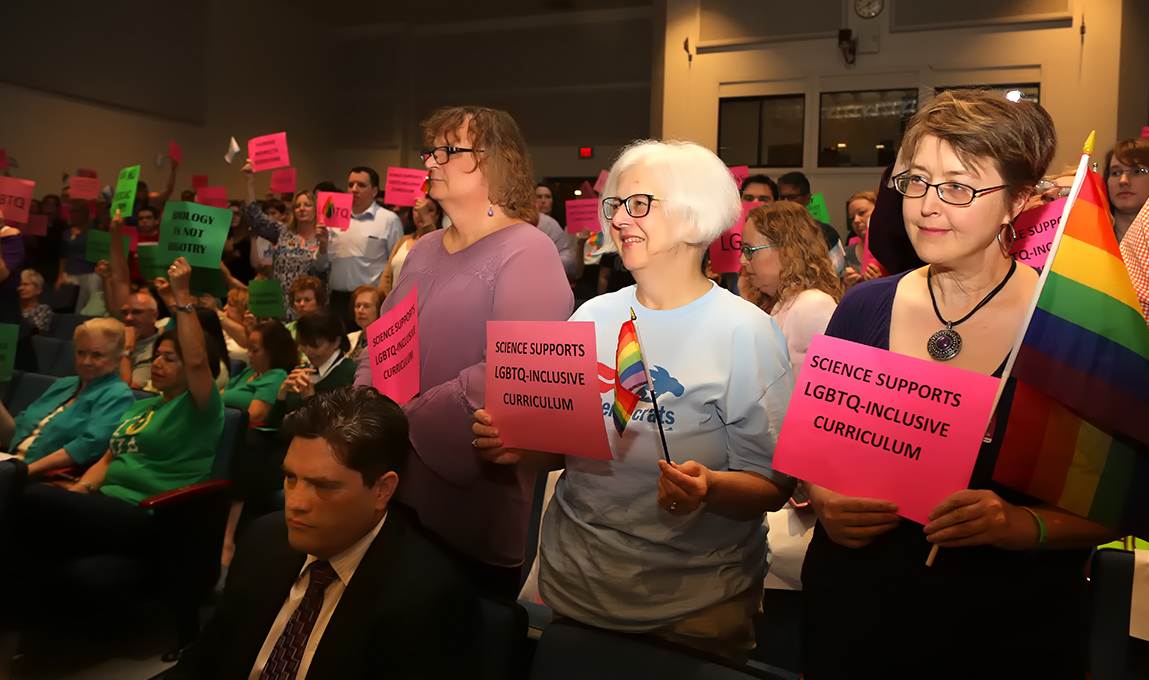 The proposed changes include using the term “sex assigned at birth” rather than “biological sex” and informing high school students about “pre-exposure prophylaxis” or “PrEP,” a treatment to protect against HIV. The FDA in May approved Truvada for adolescents to reduce the risk of HIV transmission.

Supporters of the proposed changes outnumbered opponents in a packed auditorium at Luther Jackson Middle School in Falls Church, and several of them addressed the board.

Catherine Velkoff made an emotional plea to include “sex assigned at birth.” Velkoff, who went to Fairfax schools, shared a story about her suicide attempt in 2011, when her mother was working full-time, her father was running for the Fairfax County School Board and her sister was studying abroad.

“I spent two weeks in the hospital recovering from a suicide attempt,” she said. “My mother slept in a chair in the hospital for two weeks because she loves me. I think every parent in this room on both sides would do the same thing. I am here tonight because no other family should go through what mine did and no child should go through what I did.”

Velkoff said she is thankful to now be getting excellent care, but not everyone gets the help they need in time. She said according to the National Institutes of Health, about 32% to 50% of trans people attempt suicide, and it’s closer to 50% among trans youth.

Lack of social and family support for trans youth increases suicide ideation and suicide attempts, she told the board. Trans youth with family support are much less likely to attempt suicide than those whose parents reject their gender.

Others who spoke in support of the language changes included Rev. David Miller; Rev. Dr. Debra Haffner; Shyam and Ali Munshi, who have a transgender daughter; Risa May; David Aponte; Gordon Baer and William Elledge.

The board voted down an amendment introduced by member Elizabeth Schultz to delay the vote until October, when there could be more discussion, and nixed another amendment by Thomas Wilson to require parents to give permission rather than opt their children out of FLE. With Schultz and Wilson away from the table, the board’s vote to include the language changes was unanimous.

The changes to the language came from the Family Life Education Curriculum Advisory Committee. FLECAC comprises 33 members appointed by the school board, superintendent, the county health department, the county PTA Council and the Clergy and Faith Council. You can read their proposed changes here (see Grades 8 through 12.)