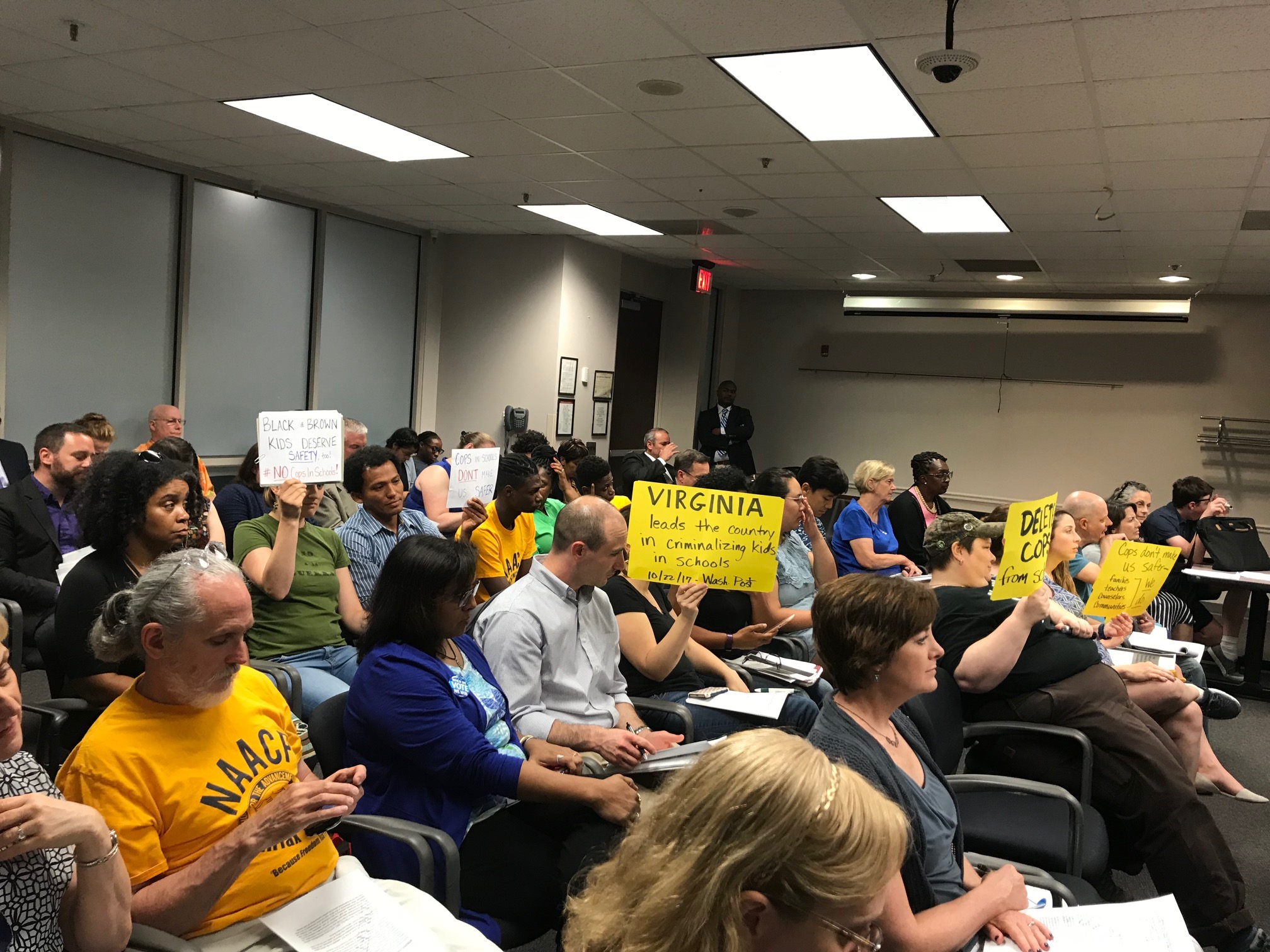 What should be the role of cops in schools? Should armed police officers even be allowed in schools?

These were among the issues that rose to the surface in a tense meeting Monday night of a community group charged with reviewing the terms under which police officers are assigned to high schools and middle schools throughout the county.

“Kids should not be consigned to hell because they made one mistake [in school],” argued Matthew Dunne, representing the Fairfax County Council of PTAs.  Dunne and 14 others are members of the School Resource Officer (SRO) Community Review Committee, appointed by Board of Supervisors Chair Sharon Bulova to review the draft of a new memorandum of understanding between the Fairfax County School Board and the Police Department governing  the cops-in-schools policy.

The meeting was attended by about 50 members of the public, some of whom waved signs and heckled speakers. Bulova, Police Chief Ed Roessler, and School Superintendent Dr. Scott Braband bore the brunt of criticism as committee members questioned key tenets of the program and called for more time to complete their review.

Bulova defended her decision to fix an accelerated timetable of only three meetings for the SRO committee, pointing out that the new agreement had to be finalized this summer so it could take effect with the start of school on Aug. 28.

But some committee members pushed for a top-to-bottom review, and even questioned whether Fairfax should station police officers in schools at all.

“There are school systems elsewhere that have safe environments without the presence of armed guards in the schools,” said Sookyung Oh, a committee member representing National Korean American Services & Education Consortium. But Commitee Chair Shirley Ginwright, representing the Communities of Trust Committee, said the program of placing police in schools is a reality, and the question before the committee is how to improve it.

Committee member Kofi Annan, president of the Fairfax NAACP, said that at least the role of police officers should be narrowly defined. They should not be viewed as administrators or disciplinarians, he said, but rather exclusively as guardians of school safety.

Annan and Diane Alejandro, representing ACLU People Power, called for more transparency in police reporting of incidents such as student searches. In an earlier article in The Blue View (click here), Annan expressed concern that police stop-and-frisk polices in schools can lead to racial profiling.

In the audience, signs included “Virginia leads the country in crimininalizing kids in schools” and “The last school shooting in NoVa was an SRO who accidentally fired his gun in a school – March 2018”.

Chief Roessler and Supt. Braband concluded the meeting by promising to take the committee members’ comments into account in drafting a new version of the agreement to be discussed at the committee’s next meeting on Monday July 16 at 7 pm at Fairfax County Government Center. The public is invited.

While the July 16 meeting was originally previewed as the last in the series, Supervisor Board Chair Bulova said she was willing to extend the project if necessary to include a fourth meeting.

Brad Swanson is the editor of The Blue View and a member of Hunter Mill District Democratic Committee. He is an international investment manager and previously worked as a diplomat and journalist