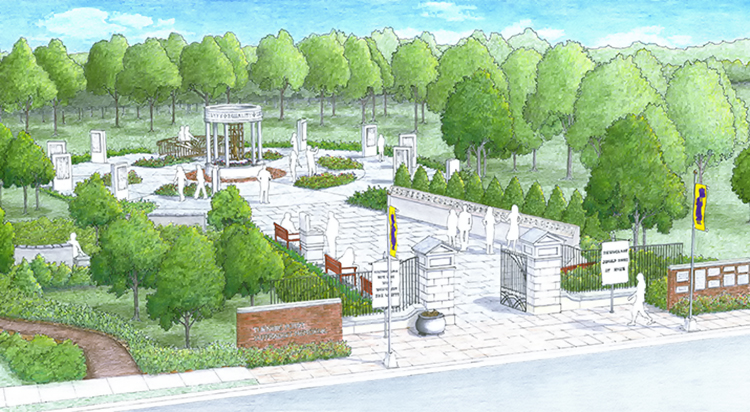 A new memorial in southern Fairfax County celebrating the courage of suffragists under brutal treatment by prison guards at Occoquan Workhouse (later known as Lorton Reformatory) is halfway to its funding goal, and on track for completion by August 2020 – the 100 year anniversary of women’s voting rights in the USA.

The Turning Point Suffragist Memorial will be placed within the new cultural area of the Occoquan Regional Park overlooking the Occoquan River. It is designed as a garden-style memorial with 19 different informational and interactive stations, symbolic of the 19th amendment, telling the 72 year history of the suffragist movement.

The memorial takes its name from a dramatic period in the suffragist campaign, when women arrested for picketing the White House for votes for women were imprisoned in the Occoquan facility and subjected to brutal and humiliating treatment by prison guards. The inhumane treatment reached a peak on Nov. 14, 1917, called the “Night of Terror,” when approximately 168 women were attacked by guards, many suffering serious injuries.

Newspaper accounts of the suffragists’ victimization helped turn public opinion in favor of women suffrage. The suffragists were released from Occoquan later in November and on Jan. 9, 1918,  Pres. Woodrow Wilson announced his support for a women’s suffrage constitutional amendment. Two years later, on Aug. 18, 1920, the amendment took effect.

The memorial is sponsored by the Turning Point Suffragist Memorial Association (TPSMA), a volunteer-led organization dedicated to honoring, memorializing, and educating future generations about the suffragists who fought for and won the right to vote for American women. It will honor all those who took part in the suffragist movement, with a special focus on those imprisoned at Occoquan, VA.

The memorial will cost approximately $2 million, with $1 million still to be raised, according to Patricia Wirth,  Executive Director of the TPSMA. The organization is running a campaign called #Donate20by2020 encouraging people to donate $20 each.  Other donating options and more details about the memorial, are located on the memorial website

The memorial is on target to be completed by August 2020, the 100th year anniversary of the 19th Amendment.  Plans are moving forward according to the Memorials’ architect Robert Beach of Robert E. Beach Architects with site plan reviews and the creation of construction documents occurring now.

The use of the word “suffragists” may seem odd — don’t we call them “suffragettes”?  There is a difference.   Suffragists believe in peaceful, respectable protests and acts to achieve their goal.  US advocates of women’s voting rights were considered suffragists.  Suffragettes are former suffragists, mainly in Great Britain, who tired of the lack of progress of peaceful means of protest and adopted the motto “Deeds not Words” and more violent disruptive types of protests such as chaining themselves to railings, disrupting public meetings and damaging public property. So now you know!

Diane Weeks is a member of the Mason District Democratic Committee

Related story:  Virginia could be the 38th state to ratify the ERA