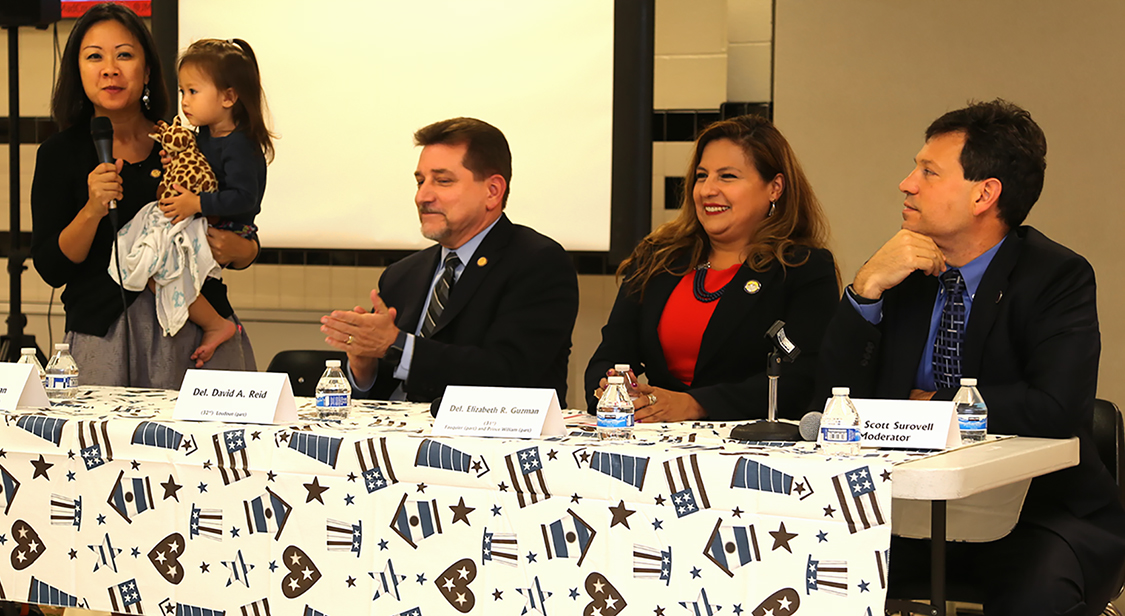 Virginia freshman Delegates Elizabeth R. Guzman, David A. Reid and Kathy Tran talked about what motivated them to run for office, what surprised them when they arrived in Richmond and their outlook for 2019 at the Blue Wave Forum held on Sept. 25 at James Madison High School in Vienna.

State Sen. Scott Surovell, who asked the questions, mentioned how much has changed since he was elected in 2009, one of 3 Democrats in a freshman delegate class of 22.

Guzman (Prince William) said she decided to run for state delegate because of how Corey Stewart, chair of the board of supervisors in her district, “referred to people who look like me as rapists, animals, criminals,” and she wanted to change that mindset. “It was knowing I would be the first Hispanic female immigrant in the assembly even though we represent 13 percent of the population,” she said, adding, “But it was also about representation. I don’t want my children, just because they are brown or their last name is Guzman, to feel less American. So I did it for them, so that we could change the future of Virginia.”

Reid (Loudon) said he decided to run “because I really felt that the political discussion going on in the nation had become very negative and very poisonous and I felt that we needed to have some candidates who would bring some dignity and respect back to the process because this is who we are as a people.”

“I remember speaking at events and saying that we need to elect people who share our values and not the extremist views that were being represented down in Richmond,” Reid said. “We introduce legislation that will help people’s lives become better.” He said college tuition was getting out of hand and he wants to make sure that “my children and your children have the opportunity to succeed.”

Tran (Fairfax) said, “When Trump won in November 2016, I realized that life as I understood it — America and its values — was being turned upside down and instead of feeling sorry for myself and my family, I decided to stand up for hope and opportunity and freedom for all, and make sure that the future that my kids have, all four of them, is a future that I have a hand in creating.”

“It’s been an incredible experience being in the House of Delegates, serving not just with the other amazing freshman but with our entire caucus and fighting for shared progressive values and keeping at it day in and day out, she said.”

When Surovell asked what surprised them most about going to Richmond, Reid said his biggest surprise was that the hours were just as long as during the campaign. “Despite the hard work, it is probably the best job I ever had,” he said. “I always say to my daughters if you enjoy what you’re doing it will never seem like work.”

Tran said she thought the idea was to have two people switch over to our side, but no Democratic bill passed 51-49. “The realization of having to get 15 or 20 votes helped me to rethink my strategy.” Tran, who brought Elise, her youngest of four children, to Richmond, said it was quite an experience having her daughter with her during a lot of business mornings. “I also made the decision to go home a lot (of evenings) so I didn’t go to as many receptions.” She said she was creative in “building the strategic partnerships we needed in other hours to pass legislation.”

When Surovell asked how to keep the energy of the Blue Wave going next year, Tran said it’s important to support the long game and make sure Republicans in Virginia understand how strong Democrats are. “We need to make sure we talk about what is at stake in Virginia, and the No. 1 issue is around redistricting and gerrymandering because that plants the pathways for all different types of policies that have lasting effects,” she said.

Guzman said we need to have candidates run on Democratic values, such as raising the minimum wage, climate change and defending public education. She said we need to have a candidate run in every single district. “In 2019, we’re going to take over House of Delegates and the Senate and in 2020, beat Donald Trump.”

Reid said we have to establish a habit of winning. “It’s not just about what happens in each district, but how we help each other,” he said. “Republicans were surprised in 2017, they won’t be in 2019. I’d really like to get into the majority so that all of that good legislation that we saw killed in subcommittees can move forward in committees and actually be voted on and help make the lives of Virginians better.”

The forum was sponsored by the FCDC State & Local Committee.