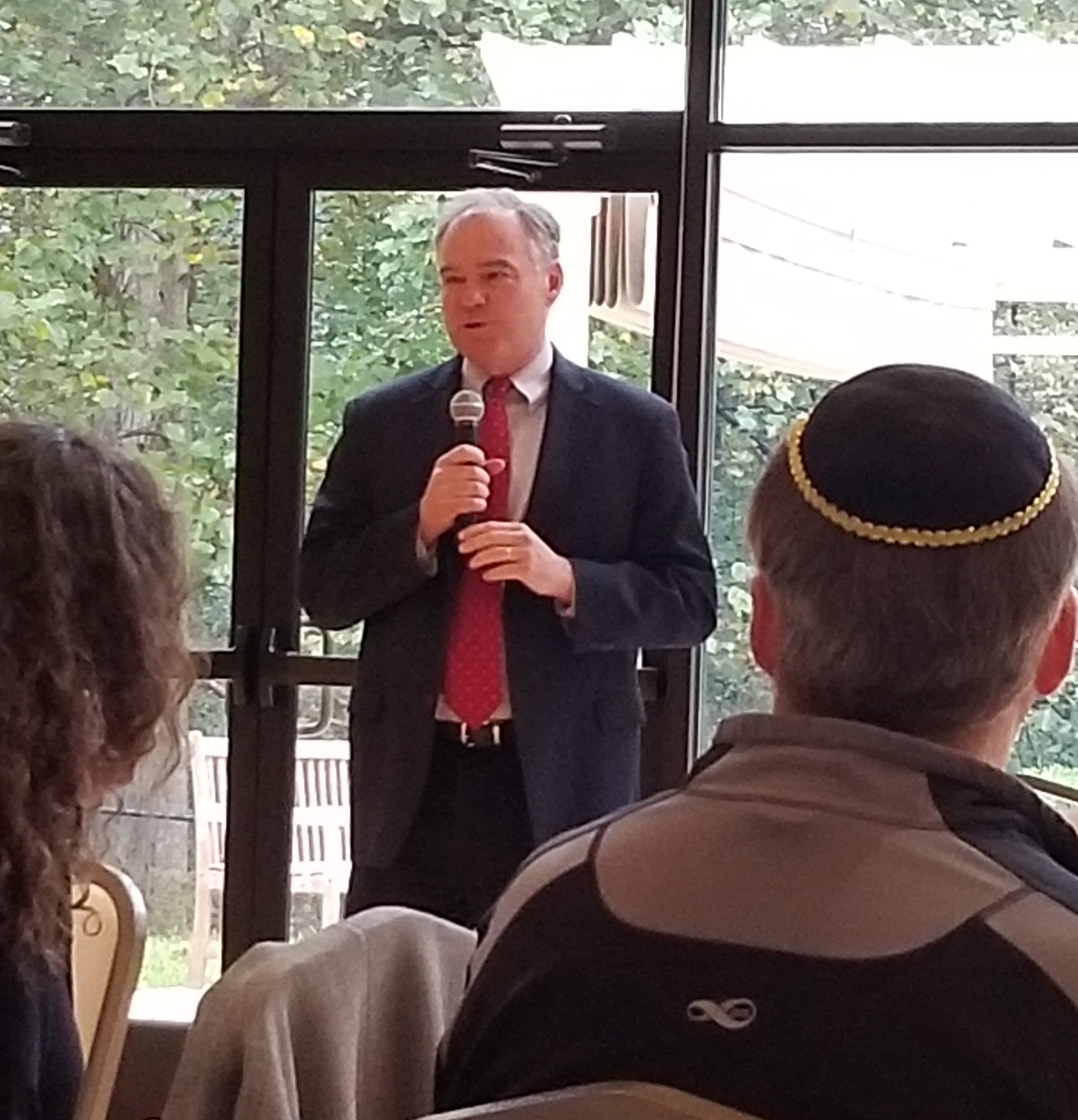 Two very different styles were on display when Virginia Sen. Tim Kaine (D) faced off against Corey Stewart, the Republican vying for his Senate seat, at a candidate panel at Congregation Olam Tikvah in the Mantua area of Fairfax on Sunday, October 14.

Sen. Kaine was firm in his views but showed a positive manner and was respectful of his audience. Stewart, by contrast, used racist attacks and fear-mongering that appeared to offend many in the audience.

The annual event, hosted by the Men’s Club of the Conservative Jewish synagogue, was also attended by Jeff Dove, a Republican running against incumbent Gerry Connolly (D) for the 11th Congressional District House seat. Connolly did not attend.

Sen. Kaine expressed support for Israel but stated that he also sees, “challenges and concerns, just like with any country.”  He laid out a vision for peace in Israel and Palestine, noting that many people thought the long-running conflict in Northern Ireland was intractable before the Good Friday Agreement put an end to the so-called “Troubles” in 1998.

On the bruising battle to approve Brett Kavanaugh’s nomination to the Supreme Court, Sen. Kaine linked the controversy to Republicans’ refusal to consider the nomination of Judge Merrick Garland under President Obama.  Sen. Kaine went on to discuss the importance of increased transparency and disclosure of political contributions.

Regarding foreign policy, Sen. Kaine stated that he supported the Iran nuclear arms deal, abandoned by Pres. Trump. He added that it was a mistake not to join with other countries and impose a conflict-free zone in Syria to deliver humanitarian assistance. He fears that the world will look back on the years-long Syrian civil war the way that we now look back on the Rwandan genocide  — with regret that we did not interfere.

After Sen. Kaine concluded his remarks, it was the turn of Stewart, who is chair of the Prince William County Board of Supervisors. Many in the audience appeared insulted when Stewart told them that the Democratic Party is no longer his father’s Democratic Party, but has been co-opted by the extreme left wing.

Stewart continued to alienate his audience as he attempted to paint Leslie Cockburn, a Democratic political newcomer running for a House seat in Virginia’s 5th Congressional District, as an anti-Semite. He also characterized Latin American immigrants as violent gang members.

Dove showed a stark contrast to his fellow Republican, speaking moderately and respectfully, emphasizing his experience fighting in the global war on terror and working in digital security.