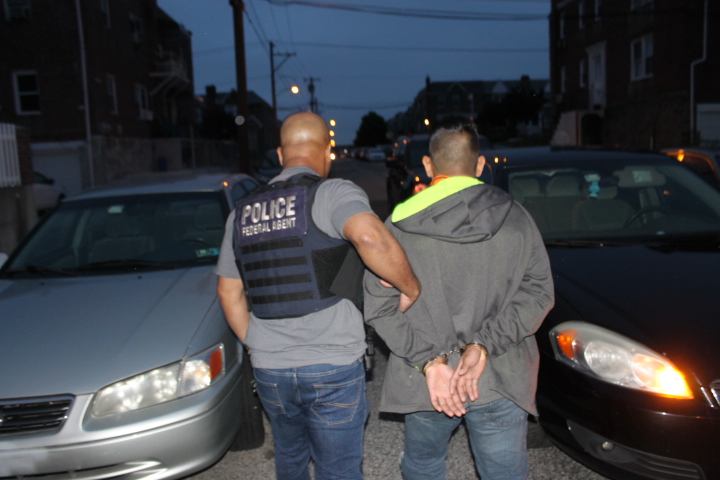 There is a family separation crisis right here in Fairfax County. The nation was rightfully shocked when 2,600 children were separated from migrant families crossing the border. Why then isn’t the Fairfax Board of Supervisors incensed that 12,037 Fairfax immigrant families have been torn apart by Immigration and Customs Enforcement (ICE)—and that Fairfax law enforcement, working out of the public eye with ICE, may be responsible for 8,000 of them?1

Fairfax has created a huge underprivileged social class living in desperation below the radar. ACLU People Power Fairfax and others have repeatedly protested this atrocity, most recently at the Board’s October 30, 2018 meeting. The Board has done nothing.

At over 12,000, Fairfax has more residents in ICE detention than each of 37 states.2 It has three times more than Manhattan and Philadelphia, both with larger populations. It accounts for 30% of Virginians in ICE detention3  with only 13% of the state’s population.4 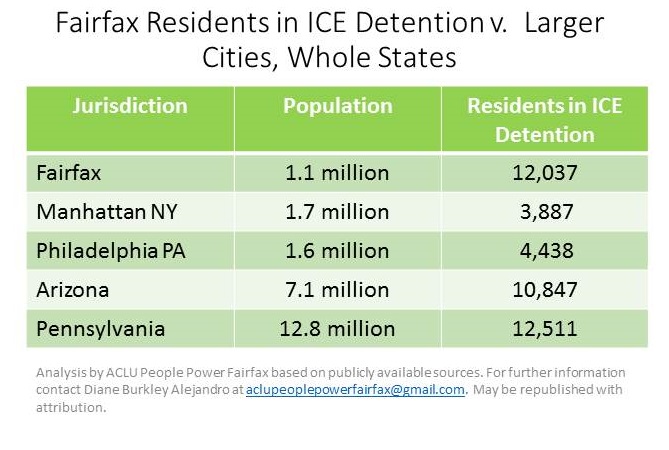 How did they get there? In last June’s Blue View, I wrote that “Most deportations are due to Fairfax County law enforcement’s initial detention of these individuals on local charges[.]” Upon further analysis, behind the scenes collaboration—which escapes public scrutiny and accountability —is likely the bigger problem.

Arrests by Fairfax police of course remain a serious concern which must be corrected. Immigrants turned over to ICE are predominantly arrested for alcohol-related and other minor offenses. Almost 70% have not been found guilty, but are transferred after a not guilty verdict, case dismissal or granting of bail. 5 They effectively are receiving life sentences just for being arrested.

But Fairfax arrests simply cannot be the only—or even the primary—reason Fairfax residents enter ICE detention. Only about 1,000 immigrants have been turned over to ICE from the Fairfax jail by the Sheriff since January 2016, out of a total in ICE detention of almost 12,000.

Up to 8,000 “unexplained” immigrant captures

The table below approximates, using national averages, the number of unexplained ICE arrests of Fairfax residents. Direct ICE arrests without local assistance nationwide account for only 30% of those in ICE detention, so we use a range of 20% to 45%.6  Other jurisdictions may apprehend some Fairfax residents as well–we estimate 10% to 30%.7 Not all 1,000 people arrested here actually live here–we estimate 50% to 100%. The net result is that, of the 12,037 Fairfax residents caught in ICE’s web, it is likely that 2,009 to 7,926 were captured by means other than independent ICE enforcement or actual police arrests. 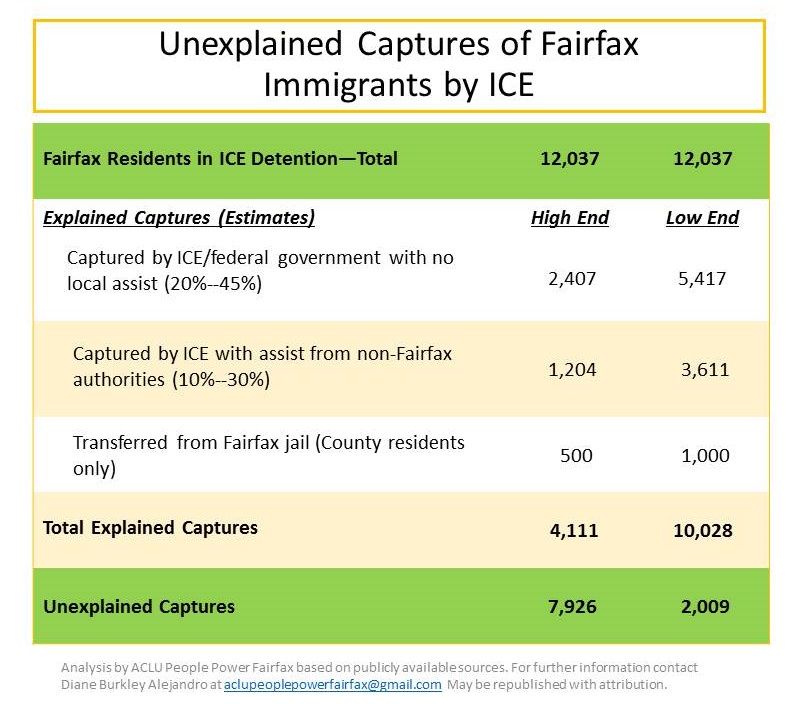 In theory, the excess detentions could be due to something other than information sharing. But we know that police act as ICE informants elsewhere.8  Moreover, localities which limit information sharing –like Manhattan and Philadelphia—have dramatically lower ICE detention rates.

The people of Fairfax County need to know the facts:

Whatever the cause, the Board should act proactively. It must adopt—and enforce—a prohibition on information sharing with ICE not otherwise required by law.

The impact of ICE detention on families

Entire families and communities are devastated when a single member is detained by ICE. Fully 85% of those families include U.S. citizens and legal residents.10

The crisis we face is not simply a “public safety” issue. It is a humanitarian, economic and health disaster.

Fairfax County has declared a state of emergency for looming harms such as hurricanes that might strike.15  How can it ignore the proven, grievous damage it is itself causing to thousands of Fairfax families? We elected the Board. Tell them to act. Information sharing in the shadows, with no accountability to the public, must cease.

Diane Burkley Alejandro is the lead advocate for ACLU People Power Fairfax, a grassroots effort to stop all voluntary cooperation by Fairfax law enforcement with ICE. She is an attorney with over 20 years’ experience negotiating changes to local and federal public policy, and a former senior political appointee in the U.S. Department of Labor, whose portfolio included immigration.

[1] http://trac.syr.edu/phptools/immigration/addressrep/ (immigrants in ICE detention with Fairfax addresses, as of November 26, 2018); The rationale for the breakout of those whose detention is unexplained and likely attributable to unofficial cooperation is discussed below. [2] http://trac.syr.edu/phptools/immigration/addressrep/ (immigrants in ICE detention with Fairfax addresses compared to other localities as of November 26, 2018). [3] http://trac.syr.edu/phptools/immigration/addressrep/ (40,412 ICE detainees have Virginia addresses, as of November 26, 2018). [4] http://worldpopulationreview.com/states/ (Virginia 2018 population 8,525,660); https://www.fairfaxcounty.gov/news2/who-we-are-now-the-demographics-of-fairfax-county/ (Fairfax population 1,131,886). [5] Data available upon request. [6] The 20% to 45% range reflects the variation in analyses of ICE data. Compare Capps, et al, Revving Up the Deportation Machinery: Enforcement under Trump and the Pushback, Migration Policy Institute (May 2018) (“MPI Study”) p. 2 (70% of those in ICE detention were captured with local law enforcement assistance), available at https://www.migrationpolicy.org/research/revving-deportation-machinery-under-trump-and-pushback with TRAC, Tracking Over 2 Million ICE Arrests: A First Look (September 24, 2018), http://trac.syr.edu/immigration/reports/529/ (25% of ICE detainees were apprehended by ICE at their home, place of work, or elsewhere in the wider community including at courthouses or at DHS offices when the immigrant had appeared for an appointment). TRAC, however, also shows a 12% apprehension breakout for immigrants turned over by federal prisons. Our high-end estimate of 45% overstates the 37% TRAC total. [7] Fairfax makes up about 12%-19% of the greater DC metropolitan area, depending on how widely the area is defined. https://factfinder.census.gov/faces/tableservices/jsf/pages/productview.xhtml?src=bkmk (9.2 million in combined statistical area). TRAC also indicates there were about 8% turned over from state correctional facilities. http://trac.syr.edu/immigration/reports/529/include/table1.html. Our 30% high-end estimate overstates the maximum total of 27%. [8] https://www.pbs.org/wgbh/frontline/film/the-gang-crackdown/ [9]  Herrity Report Jan. 2018 (“Once identified as gang members based on tattoos, phone posts, and other evidence, they were placed in custody and taken to the Fairfax County jail to be held for deportation. As you will read further below, the NVGTF and our Gang unit will no longer be able to do this unless they capture the identified gang member committing a crime.”), https://www.fairfaxcounty.gov/springfield/sites/springfield/files/assets/documents/january_2018_part2.pdf [10] Nik Theodore, Insecure Communities: Latino Perceptions of Police Involvement in Immigration Enforcement, p. 3 (May 2013) (Insecure Communities”), available at http://www.policylink.org/sites/default/files/INSECURE_COMMUNITIES_REPORT_FINAL.PDF.

[11] Migration Policy Institute, Deportation of a Parent Can Have Significant and Long-Lasting Harmful Effects on Child Well-Being, As a Pair of Reports from MPI and the Urban Institute Detail, (Sept. 21, 2015) (“MPI 2015 Study”) https://www.migrationpolicy.org/news/deportation-parent-can-have-significant-and-long-lasting-harmful-effects-child-well-being-pair.