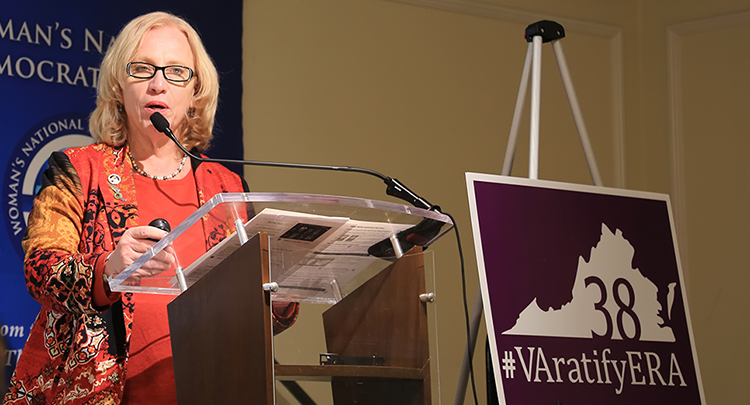 Winning the decades-long fight for the Equal Rights Amendment (ERA) is in Virginia’s court, or actually its General Assembly. And the push is on to finally get it passed in 2019 in both Virginia’s Senate, where it has passed five times, and its House of Delegates, where it has languished in committee year after year.

In 2018, nearly 1,000 people descended on Richmond to support the ERA. In January, VAratifyERA wants 5,000 people to show their support for the amendment, according to Eileen Davis, co-founder of Women-Matter.org, who was one of four influential women on the “Equal Rights for Women: One State Away from Constitutional Equality” panel discussion held on December 3 at the Woman’s National Democratic Club in Washington, D.C.

“We want 50 people a day in the general assembly walking around,” Davis said. “We want them to realize that we’re not going away. If it doesn’t pass in 2019, we’ll come back with 20,000 supporters in 2020.” She urged supporters to get involved at VAratifyERA.org.

“There’s a lot of opposition to equal rights for women that doesn’t make a lot of practical sense,” Davis said. “What I’ve come to understand is that when you’re used to privilege, equality feels like oppression. What I say to them is, ‘Equality is like love. It’s not a zero sum. The more you give, the more you get. It’s a self-multiplier.’”

Davis wondered at what point do we just scream obstruction. Despite the Senate passing the resolution five times, House Del. Mark Cole, chair of the Privileges and Elections Committee, hasn’t put it on the agenda. “Sooner or later he’s going to have to stop delaying a vote and we’re hoping this (2019) is the year.”

She said the American Bar Association in letter dated June 6, 2018, identified three immediate effects of ratification: establishing gender equality under the law as a fundamental and irrevocable tenet of our society, requiring judges to apply the highest level of scrutiny when deciding cases as they do with race, religion national origin and protecting and invigorating enforcement of existing gender equality law

If Virginia becomes the 38th state to ratify the ERA, there is the 1982 deadline issue to deal with. Panel member Wendy Murphy, J.D., says that she has been working with a team of lawyers for months, and they are already prepared to file cases in federal courts around the country the moment Virginia ratifies. They will argue that ERA is valid, the issues are capable of being decided in court, and the deadline and rescissions by some states are invalid. Murphy, director of the Women’s and Children’s Advocacy Project and professor of sexual violence law, New England Law, Boston, stressed that it is important to resolve these issues in court and only turn to Congress to rescind the deadline if they lose in the Supreme Court.

Getting the ERA passed has been a long fight for Ellie Smeal, president and co-founder of the Feminist Majority Foundation and former president of NOW. Smeal recalled a silent vigil on the steps of the U.S. Capitol in 1971, although she wouldn’t recommend being silent now. She said after the vigil, her group went to the National Woman’s Party house to meet suffragette Alice Paul. They were very late, but Paul was waiting for them and started ringing a bell and shouting “they’ve come, they’ve come.” When Smeal felt uncomfortable, a friend told her, “Ellie, you’d be excited, too, if you were waiting 50 years for reinforcements.”

When the ERA passed in 1972, Smeal’s group went back to the National Women’s Party and found Alice Paul in the back rooms, sitting at Susan B. Anthony’s desk and crying. Paul said that Congress had tricked us — the amendment wouldn’t pass because they put a time limit on it, and because it would apply to states as well as the federal government.

What’s going to get interesting is getting on the right side of history, said Andrea Miller, executive director of People Demanding Action. “If the court says you’re going to have to make Congress take that deadline off, think of all that excitement of getting the House, with its Democratic majority, passing it,” she said. “The Senate is going to be wondering if they are going to sit there looking stupid. This is the kind of vote women will remember when the time comes.”

The panel was co-sponsored by FCDC’s National Affairs Committee (NAC) and the Feminist Majority Foundation. In her introduction, NAC Chair Sandra Klassen said, “As we all know, women remain second-class citizens. Without the ERA giving a constitutional backbone to gender equality, the political and judicial victories women have achieved over the past 200 years remain vulnerable to reversal or appeal at any point by simple majority vote.”

“Among the benefits from ERA passage are equal pay for women, which will move large numbers of people out of poverty and into the middle class and stimulate our economy,” Klassen said.

Photo at top is of Eileen Davis, Co-founder of Women-Matter.org, who is planning a big ERA push in Virginia in January.