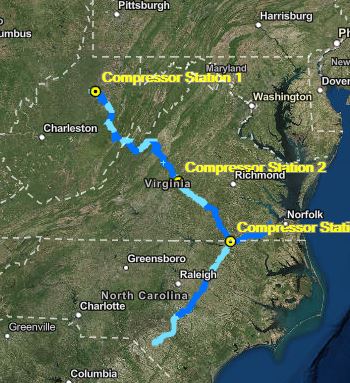 Is an African American community in rural Virginia the right place to put a massive compressor station for a natural gas pipeline? This is the question the Virginia Air Pollution Control Board will consider at their meeting Tuesday, January 8.

The compressor for the Atlantic Coast Pipeline is one of only three along the 600-mile planned pipeline route from West Virginia to North Carolina. It is opposed by some environmental groups claiming the 55,000 horsepower facility will destroy the bucolic community adjacent to it with 24-hour noise and toxic emissions.

This community, Union Hill, is populated by African-Americans, including families who trace their roots back to slavery at a nearby former plantation.

Now the Air Board, which has authority to issue a permit, will consider the suitability of the site for the compressor in its upcoming meeting. Key to the question is what guidelines the board must use in making this decision.

The Air Board, like the State Water Control Board, is central in the permitting process for pollution control facilities. These boards are comprised of citizens appointed by the governor and working without pay to promote transparency via public debates and votes, and to broaden the base of regulatory decision making.

The boards actually predate the state’s Department of Environmental Quality—the Water Board in 1946 and the Air Board in 1966. DEQ was formed in in 1993 by combining the staff agencies that had been serving the Air and Water Boards, as well as the Waste Management Board, another citizen authority.

Some functions of these boards are routinely delegated to DEQ. However, when a permit is before the Air Board, it is the board’s statutory responsibility to consider, among other factors, “the suitability of the activity to the area in which it is located.”

But what has “site suitability” meant in practice in Air Board decisions? Historical and legal records do not offer many concrete examples, but they indicate that the board has struggled for decades to interpret the idea of suitability.

In 1979, the Air Board denied on very broad grounds of site unsuitability a permit to a Dano Resource Recovery, Inc. industrial facility in King George County that would have handled the District of Columbia’s sewage sludge. Contemporaneous news reports said permit denial rested on the fact that the site was zoned for agricultural use and that there would be objectionable odors. It does not appear that this decision was tested in court.

Then in 1981, the Air Board approved a controversial permit for a quarry, despite public objections on the grounds of unsuitability. A Richmond Times Dispatch article describes a Virginia Assistant Attorney General as saying that the board might be able to deny a permit even if the applicant complied with air and zoning regulations, if the board felt that “other factors make the activity undesirable.” But he noted the lack of legal precedent and the need for the board to clarify its intentions.

To that end, the board asked its staff to prepare regulations that would clarify the “non-technical” criteria the Board must consider with respect to site suitability. A 1987 board statement on suitability, not regulations, seems to have been the sole outcome of these discussions. The board announced that it would limit its consideration of site suitability to “air quality and health.”

In 2008, when I was on the Air Board, two fellow board members suggested that the 1987 Board statement should be revised, to clarify the board’s powers to determine site suitability (or unsuitability) as separate and distinct from those of local zoning authorities. The worry was that the board might illegally cede its authority to local officials. The board members’ ideas were rebuffed by senior officials in the administration of then-Gov. Tim Kaine, including DEQ managers.

Given Virginia’s long and continuing history of racism, it’s hard to argue with the contention that a longstanding agricultural, African American community is simply the wrong place for this industrial facility. The lack of a clear set of legal or policy precedents on site suitability complicates the board’s task. But the special use permit for the compressor station has been challenged on grounds that it is inconsistent with local land use.

I return to a suggestion I made in an earlier article in The Blue View: Gov.  Northam should pressure Dominion Energy, a major partner in the pipeline consortium, to find another site for the compressor station. Alternatively, he should work with the General Assembly to that end.

Dr. Vivian E. Thomson, a retired professor in the Departments of Environmental Sciences and Politics at the University of Virginia, served on the Air Board from 2002 to 2010. She is the author of three books, including Climate of Capitulation: An Insider’s Account of State Power in a Coal Nation (2017, MIT Press), a first-person view of who wields power—and how—in air pollution policymaking at the state level.