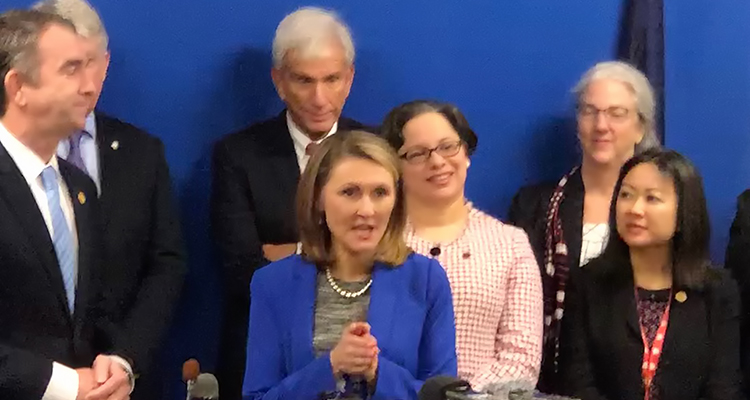 Updated 4:10 pm to remove reference to town hall, which has been cancelled

Virginia Del. Kathy Tran (D-42) has apologized to constituents for misspeaking, while reaffirming her opposition to infanticide and clarifying that a bill she sponsored would not extend the time period for legal abortion in Virginia.

Tran kicked up a firestorm last week in answering yes when asked if her bill would allow a woman in labor and about to deliver to have an abortion. She later took back the answer, saying that an abortion to interrupt a live birth would be infanticide and illegal.

In fact, Tran’s bill would not loosen abortion restrictions but simply reduce the number of doctor approvals required for an abortion to protect a woman’s health from three to one.

But her initial comment was met with fierce denunciation by Republicans and pro-lifers, including death threats against Tran.

To set the record straight, Tran issued the statement below in an email to constituents.

“Women in my family, in my district, and across Virginia have told me how they have made the deeply private decision, in consultation with their doctor, as to whether or not they would have an abortion. As such, I introduced House Bill 2491 to repeal politically motivated, medically unnecessary, and unduly burdensome barriers Virginia women currently face in order to access these healthcare services.

I presented this bill in a hearing on Monday. Because a version of this bill had been introduced in both the Virginia Senate and House of Delegates in previous years, and it was also introduced in the Senate this session, I was caught off guard by the tenor of the questions during the hearing. I wish I was quicker on my feet, and I regrettably misspoke.

I want to clarify what is allowed under Virginia law today and what House Bill 2491 would have changed:

Infanticide is illegal, and House Bill 2491 does not change this — It would continue to remain illegal, and I strongly condemn these heinous acts.

Also, Virginia women can currently access abortions during the latter stages of pregnancy under limited circumstances that affect the mother’s health, as long as three doctors certify her health is at grave risk.

However, in a medical emergency, women need to be able to make timely decisions in consultation with a doctor she trusts, so House Bill 2491 would have changed the law to allow a woman to protect her health if one doctor certifies that she is in danger of physical or mental harm.

I regret that this debate has been politicized and that the focus has shifted away from where it should be: trusting women to make their own healthcare decisions in consultation with their doctor.

Since the bill hearing, I have heard from women in my district and across Virginia who support my efforts to get politicians out of medical decisions. I also appreciate having the support of Governor Northam, Lieutenant Governor Fairfax, Attorney General Herring, and my colleagues in the Virginia House and Senate – together, we will continue to stand with Virginia women.”