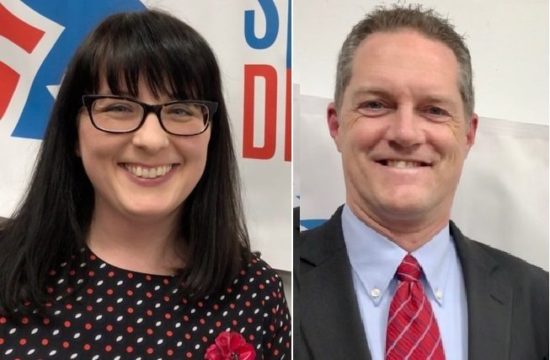 Two candidates vying for Democratic Party endorsement for Springfield District school board member faced off on Thurs. Feb. 28 for an hour-long debate before an audience of about 70.

Laura Jane Cohen and Robert Walter, both education professionals with children in Fairfax County public schools, largely agreed on most topics, but differed on their choice of the biggest challenge in public education. For Cohen it was testing, and the impact it has on both teachers and students.  For Walter, it was the shortfall of new teachers entering the field.

In testing, Cohen said, “We need continuity across the USA but we need to change how we look at testing… Comparison shouldn’t be to other students — we’re not seeing the individual’s progress.”

To supplement testing, Cohen called for more staff to provide for individual student needs, whether it be for disability or enrichment. She also favored increasing the use of teacher aides. “When you’re alone with 35 kids, its pressure,” she said. “Having an aide would make it possible to concentrate on an individual student’s issue or even leave the classroom if necessary” such as to use the lavatory.

Walter focused on the difficulty of recruiting and retaining teachers.  “They aren’t treated as professionals, ” he said. “We need to invest more in salary, benefits, and training for teachers, as we do with police and fire fighters.”

He added, “We need to maintain teachers who inspire. If we bleed teachers, that costs us more. We need to pressure the Board of Supervisors to increase salaries.” Fairfax County teachers need to be able to afford to live in the county they serve, he said. Moreover, “We need to pay more to teachers and support staff: instructional assistants, counselors, nurses, and bus drivers.”

The event was held in the Pohick Regional Library, in Burke, with Jessica Bowser, Deputy Executive Director, Fairfax Education Association and member of the Lee District Democratic Committee, serving as debate moderator.

School board candidates are formally non-partisan, but the major parties endorse favored candidates. In the case of Springfield, the district Democratic committee will vote on April 27 to determine whether to endorse Cohen or Walter for the Nov. 5 election

In his opening statement, Walter spoke of his motivation to become more involved with the school system after passing 13 temporary trailers used as permanent classrooms, which he saw daily driving his daughter to school. He pointed to the need to “reduce or eliminate the 1,000 trailers [now in use] unless used temporally for construction”.  He wants to eliminate the need for students to leave secured areas and to walk in open areas and near roads to reach bathroom and other permanent school services.

Cohen quieted the audience, in her opening, recalling that lack of doors in local classrooms disturbed her after the Sandy Hook school shooting. Although her effort to get doors was successful, she said that she wanted to do more for school security. She said the best deterrent to school violence is students going with “tips” to trusted adults.

Cohen advocated an increase in mental health counselors and social workers and a reduction in their administrative burdens, “because now 81 percent of their day they aren’t getting to kids.”She also said she hoped to gain better acceptance for LGBT+ students.

When asked to choose a critical FCPS policy to expand. Walter said more should be done to promote environmental stewardship and learning with solar power purchase agreements at each school, and conversion from diesel vehicles.