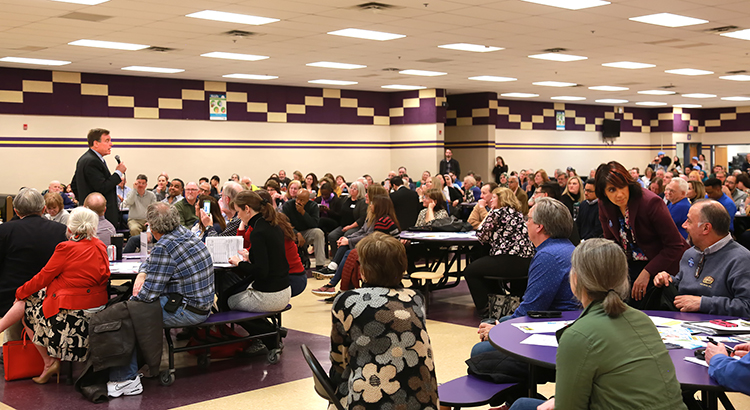 U.S. Sen. Mark Warner came to the Fairfax County Democratic Committee’s March meeting on Tuesday night to deliver a “report from the front.”

“I’ve been spending huge amount of time looking into the attack on our democracy that took place by Russia,” he said. “I, like probably many of you, have been surprised to say the least by what happened with the Mueller report. I have not seen it, you have not seen it, but I will not rest until we all see it.”

Warner outlined what we know that is without question:

“We spend $716 billion dollars on defense; Russia spends $70 billion,” Warner said. “I believe in a strong defense, but we may be buying too much 20thcentury stuff when most of the conflict in the 21stcentury is going to be in cyberattacks and misinformation and disinformation.

“If you look at what Russia did in our election, the Brexit vote and the French presidential election, add it all together and it is less than the cost of one new F-35 airplane. As Democrats, as Americans, we need to rethink how to protect our democracy on an ongoing basis. It would be great if we actually had a partner in the White House.”

Warner noted that China is investing heavily in artificial intelligence, 5G wireless and quantum computing. Instead of taking on that issue, the administration doesn’t realize the risks, he said.

“We need to put some guardrails on it,” he said. “For most of our lives, America always led in technology. Now all of that is up for grabs.”

Warner brought up Trump’s new attack this week on Obamacare and the Republican hypocrisy over healthcare. “Republicans said they wanted to suddenly be the party of health care. Think about this for a moment. This was the crowd of repeal and replace that couldn’t repeal and didn’t have the foggiest idea of a replacement. And they are now trying to advance court cases to completely overturn Obamacare.”

Warner said that we need to recognize that we need to make some changes in our system so that everyone has a fair shot. “In a lot of ways, modern American capitalism is not working for enough people,” he said. “I don’t say we throw it all out, but we need to recognize it. One-third of the work force in America today does some level of contingent work. They are out there on the edge with no benefits at all. There should be a social contract regardless of the work you do, you should get some benefits.

“I’m not sure many of the great companies created after World War II could be created in a system that focuses on short-term profits over long-term value creation. I was a business guy, but we need capitalism based not just on shareholders, but on stakeholders where businesses actually have to recognize the value of their employees and their community and companies don’t sacrifice their own long-term best interests.”

Warner said Democrats need to “work their tails off this year” to choose who is on your school board, your board of supervisors and decide how to make sure that the Virginia state House and Senate are continuing to be progressive, and that we don’t have efforts from Republicans to try to roll back the Medicaid expansion.

“We’ve got to make sure that we come together after all the differences we’re going through during the nomination process,” he said. “Too much is at stake at the state and county level, Richmond and Lord knows, in the 25-plus years I’ve been in politics, I’ve never seen anything like what goes on in Washington these days. That is not the America that we want to leave to our kids.”

Top Photo: Sen. Mark Warner gives a “report from the front” to nearly 300 members of the Fairfax County Democratic Committee on Tuesday.