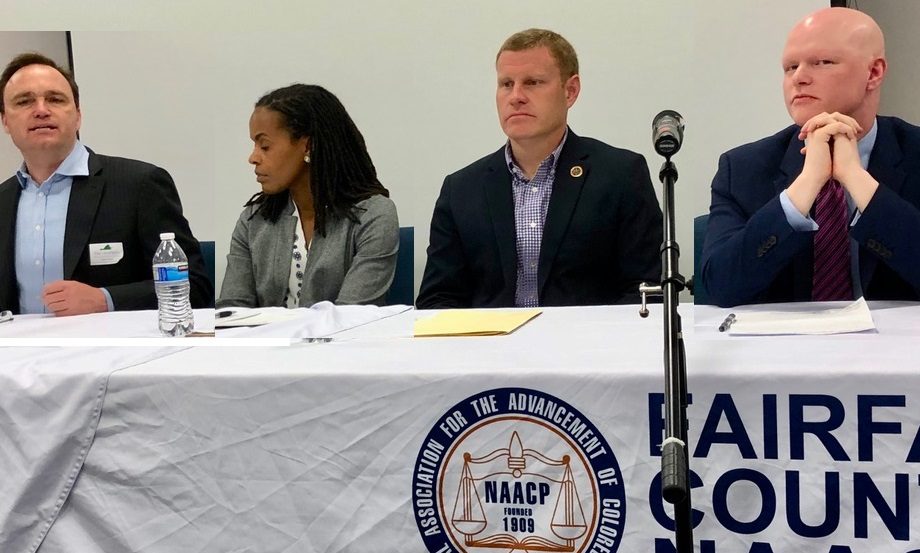 Affordable housing and social and racial equity are the most important issues facing Fairfax County, according to the Democratic candidates for chair of the county Board of Supervisors.

The four candidates, who will face off in a primary on June 11, met at a forum sponsored by the Fairfax County NAACP on May 11 at the Heritage Fellowship Church in Reston.

Here is a summary of their comments:

Number one issue facing the county

Ryan McElveen, at-large member of the Fairfax County School Board since 2012, highlighted climate change and affordable housing. “We need a county-wide action plan.  It must be resilient and protect our environment for the future.” McElveen said even small actions, like eliminating Styrofoam food trays at school, can have an appreciable impact.

Jeff McKay, Lee District supervisor since 2007, put the focus on fulfilling the social and racial equity goals of the county’s “One Fairfax” policy to ensure that all residents receive an equitable opportunity to succeed. “If we can’t lift up all corners of the county then we aren’t fulfilling our role,” said McKay.

Alicia Plerhoples, Georgetown University law professor, also noted that opportunity is not equal now– Fairfax is a rich county but has pockets of poverty. She advocated more multiple housing units, especially “starter” homes for younger households. She also proposed an ordinance to enact the restaurant tax that voters rejected in 2016, describing it as a hard decision that no one wants, but that is needed to provide greater social equity.

Tim Chapman, former chair of Virginia Housing and Development Authority, underlined the importance of affordable housing. “If you can’t afford to live where you work…. that’s a tax on the poor,”  he said. “We can’t be one of the richest counties in the country and have trailers at our schools.”

Affordable housing received a great deal of attention from all the candidates. Chapman, who has built affordable housing as a developer, said, “We must overcome community issues for affordable housing. We need community-based engagement. Builders need to go to communities for approval or at least lack of opposition. With unemployment at 2.4%, we need safeguards against a situation as in California, where people are pushed out of housing even though they have jobs. We need to stop delaying affordable housing.”

McKay believed that,  “We must be bold in writing plans for affordable housing in all corners of the county, not just in certain places.”

Plerhopes proposed holding developers accountable for providing multi-unit housing with multiple bedroom units.  Communities that don’t want affordable housing should hear stories like hers — she was homeless for a period at the age of ten — and understand how peoples’ lives could be better fulfilled when housing is available.

McElveen pointed out the importance of preserving green space –this can be achieved even while expanding affordable housing, he said.