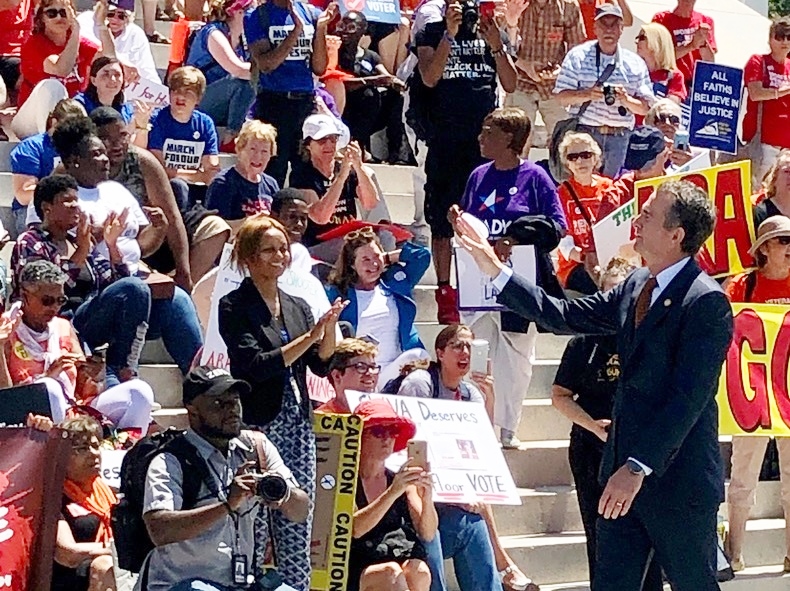 A day that began with hope quickly ended in anger and frustration as Republican state legislators in Richmond abruptly shut down a special session on gun violence less than 90 minutes after it began on Tuesday, July 9.

Democratic legislators were shocked when Republicans used their small majorities in both the state House and Senate to adjourn without debating any of the approximately 30 gun-related bills that had been filed after Gov. Ralph Northam called the special session.

The morning had begun promisingly, with a stirring address by Northam to several hundred gun safety advocates at a Unity Vigil rally outside the Capitol building.

“I’ve been to too many funerals,” Northam said, recalling that over 1,000 Virginian lives ended by gun violence in 2018. “We appreciate thoughts and prayers, but we’re here today for votes and laws.”

Attorney General Mark Herring underlined the urgency: “Every day we fail to act, we do disservice to those killed and lost to gun violence.”

Their words were eagerly greeted by gun safety groups, many wearing T-shirts showing their affiliation: Moms Demand Action, Brady United, National Organization for Women, and others.

After the rally, as legislators entered the Capitol to begin the session, most who spoke to The Blue View were hopeful, but some were skeptical.

• Sen. Lionell Spruill (D-5): “We need to do more to protect the public but with sensible laws.”

• Sen. Chap Petersen (D-34): “We will get organized in the [Courts and Justice] Committee soon where I’m carrying a bill on magazine capacity and suppressors. Glad to have lots of people here supporting.”

At the same time, a sizable group of gun supporters from the National Rifle Association and other gun groups held their own vigil, many wearing camouflage and carrying firearms, separated from the gun safety supporters by a large contingent of police.

And it was their side that won the day.

In an ambush that was clearly pre-arranged, in under 90 minutes after the session began, and before any formal action could be taken on any bill, Republicans in both chambers introduced motions to adjourn, and rammed them through on party-line votes. Sen. Petersen’s attempt to call for debate in the Senate was overruled as contrary to the assembly’s rules. In both chambers, Democrats could only protest from the sidelines.

The next time the General Assembly convenes to consider gun violence or any other issue will be Nov. 18. It will be a lame duck legislature, after the general election on Nov. 5 in which all 140 House and Senate seats are up for election.

By then, perhaps the chant from the crowd outside the Capital in the pre-session rally will have proved prophetic: “You vote today. We vote in November.”

Photo: Gov. Northam addresses gun safety supporters on the steps of the Capitol in Richmond/ Photo by Susan Laume