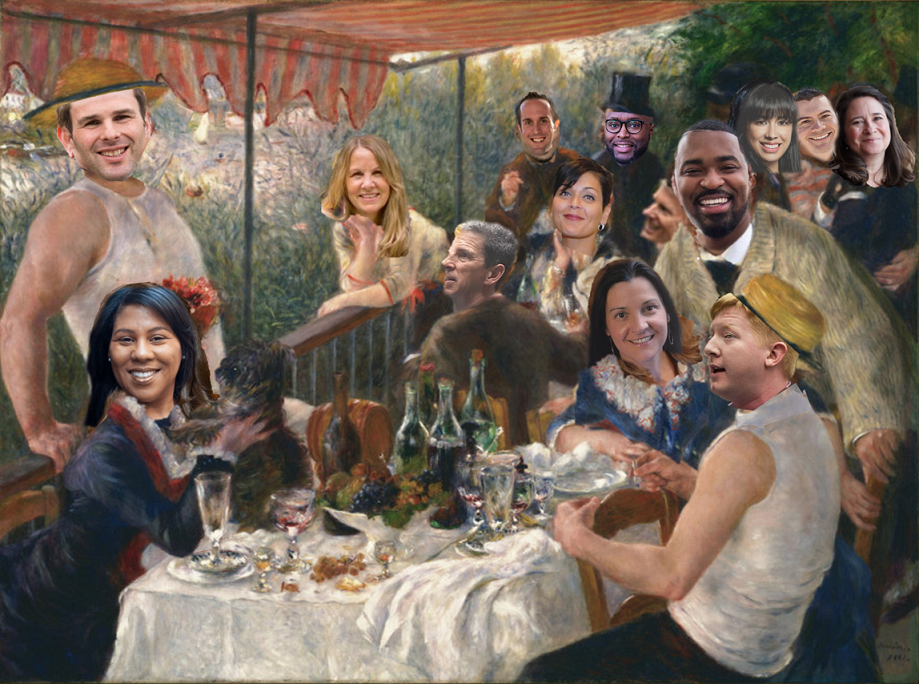 A curious alteration of Pierre-Auguste Renoir’s famed Impressionist painting “Luncheon of the Boating Party” has captured attention at recent events. Wait, isn’t that state delegate candidate Dan Helmer (dist. 40) in white? And there’s some other familiar faces there…

Many of these faces and close to 200 more showed up for a real-life boating party on Sunday, Aug. 4, at Lake Barcroft, sponsored by Virginia Blue Wave 2019 to raise funds for state Democratic candidates, cleverly promoted by the take-off on Renoir’s iconic painting

On a warm sunny afternoon boaters floated across the lake in three pontoon vessels lashed together, as well as listening to stirring speeches, meeting the candidates and enjoying peer-to-peer networking.

In her opening remarks, Jessica Mott, Team Lead of the VA Blue Wave 2019 fundraising campaign, welcomed the candidates and representatives of 18 of the 29 campaigns supported by the initiative.

“We’re here today for a common purpose”, Jessica said, “to secure a General Assembly that will reflect the values and address the issues we care about – health and education, environment and climate change, social justice and equal rights—and reforming our laws to avoid the terrible gun violence we are seeing far too often.”

The success of the event — over $70,000 has been raised to date —  highlighted the growing strength of grassroots groups in contributing to two successive “blue waves”, in 2017 and 2018. With key elections in 2019, the VA Blue Wave 2019 approach – raising money in advance of primaries, then allocating it out to selected priority races – is adding essential financial, messaging, and volunteer support to established Democratic committees and coordinated campaigns.

Andrew Perrow, Regional Organizing Director of Next Gen America, shared insights on strategies to increase voter turnout, of such critical importance this off-off-year election. Discussion highlighted the concept of “flippable” – where people are eager to support districts outside their own – as pivotal to recent wins.

The candidates and their representatives offered brief remarks on their critically important races. Spurring especially appreciative cheers was Dan Helmer’s offer to personally knock on every door where a canvasser identifies an undecided voter!

The catchy wave-themed titles of the categories of candidate support clearly highlights Democratic challenges. Attendees heard from these candidates:

Host Stair Calhoun, Lake Barcroft resident and Network NoVA founder,  said, “We have a unique opportunity this year in Virginia, and we know that the only way to make change is to change their seats. It’s no exaggeration to say that the November election in Virginia will be pivotal for the future of this country.”

Kimberly Davis is an environmental planner and a member of Springfield District Democratic Committee, where she serves on the Precinct Ops Team.