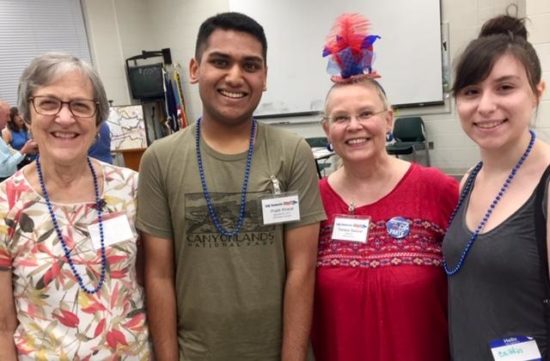 It’s never too early to begin grassroots organizing. That is the concept behind an innovative program at Sully District Democratic Committee that enables students to organize and participate in political events in their own community.

Gun violence, unsurprisingly, is one of the topics that students in the program – called GROWTH Student Interns – feel most strongly about.

“I am fifteen years old and a rising sophomore at Westfield High School,” said Aaryan Rawal, a GROWTH intern. “Two of the victims of the Virginia Tech Shooting, along with the shooter himself, graduated from my school. It makes me wonder if the person sitting to the right of me in my math class will be a future mass-shooter, and if the person to the left of me will be one of their victims.”

He added, “That scares me. America [is] the only country where the threat of mass-shootings is so high that we have to have lock-down drills.”

Program co-leader Alice Foltz, a retired teacher and debate coach, said that Aaryan, like other interns, “is definitely energized to organize around this issue, but also knows that political change is needed before there can be legislative change.”

She continued, “All of the GROWTH interns know that lots of hard work….canvassing, calling, data analysis… is needed to make the changes we want. “

Foltz and co-leader Teresa Selove began the program in May.   “Like most [Democratic] district groups, Sully had a huge increase in membership in the past two plus years, but there was a concern that nothing was being done to involve youth,” said Foltz. “GROWTH was a response to that.”

The name initially came from an acronym – Grass Roots Organizing With Teens in High school – but as college students also joined the program,  the name now stands alone.  There are four students in the program now, but the leaders expect more as the new school year opens and activities gather steam ahead of the Nov. 5 election.

Activities being planned at GROWTH include a gun safety town hall with local candidates giving their views and a night for Sully youth to meet with elected officials from the district.

The current interns, besides Aaryan, are:

Foltz said the program is open to more participants. Her message to students: “Sign up now to join these dynamic youth leaders and make a difference!”