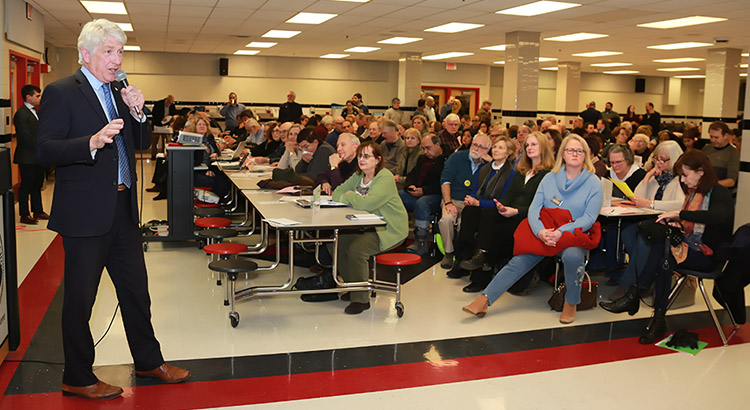 Virginia Attorney General Mark Herring kicked off the meeting at Madison High School in Vienna by thanking Fairfax County Democrats for all that we do. “Year in and year out, you’re a committee that really delivers,” he said.

“There is so much going on in the General Assembly, he said. “I was so proud yesterday when Virginia became the 38th state to ratify the Equal Rights Amendment.”

“We have had measures that haven’t even gotten a hearing in the past few years that Republicans have been in control. Now these bills are going to pass and we’re going to work to keep our community safer.”

Herring said that gun safety legislation is now passing committees, real criminal justice reform is finally getting traction with a measure to decriminalize marijuana, and laws to finally crack down on predatory lending and combat the rise in white supremacist violence will pass.

Outgoing FCDC Chair Dan Lagana opened the meeting and thanked several volunteers who went above and beyond in contributing to committee. Among them were Treasurer Nadja Golding, new FCDC Chair Bryan Graham and Tom Goodwin.

One of the more controversial topics at the meeting was a resolution urging adoption of nonpartisan anti-gerrymandering reforms and rejecting a proposed redistricting amendment, Senate Joint Resolution No. 18. The resolution was approved after much discussion on the pros and cons of rejecting what some called a “flawed” redistricting amendment. Many members said a fairer process for redistricting is needed. Joanne Collins said the amendment could set us up for Republican gerrymander. “We are redistricting in 2021, we are in the majority now and we need to give our legislators the leeway to take a look at what’s available,” Collins said.

FCDC members also approved several amendments to the Bylaws including:

The committee set the fee for associate members at $40. The current fee for voting members is $75. A handout describing the authority and responsibilities of FCDC elected officers and standing committees was also made available at the meeting.