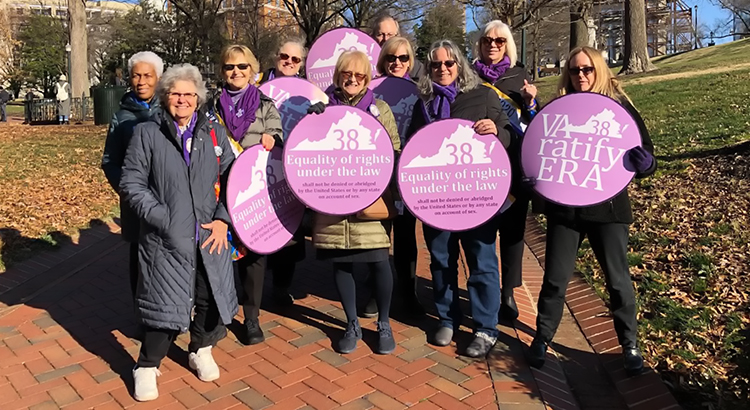 Editor’s Note: A statements of support for the Equal Rights Amendment from the Herndon-Reston Indivisible Women’s Issue Group.

On January 27, the new Democratic majority in the Virginia General Assembly passed the Equal Rights Amendment (ERA), officially making Virginia the 38th state required for ratification into the United States Constitution.  As is typical with many women’s rights issues, there will likely be a fight to make the ERA the 28th Amendment. The current Department of Justice issued a legal memo concluding that the 1982 deadline for ratification has expired, therefore the ERA should not be ratified. The National Archives, which certifies the ratification of constitutional amendments, said it would abide by that opinion, unless otherwise directed by a final court order.

However, there is good news! The ERA deadline is not within the text of the amendment and has previously been extended. It is therefore considered an arbitrary deadline. On February 13, the U.S. House of Representatives passed H.J. Res.79 calling for the removal of the deadline that was imposed 40 years ago. The House legislation has been received by the Senate, where it was referred to the Judiciary Committee. The bad news is, of course, the Senate needs to now pass the corresponding legislation, S.J. Res. 6, in order to remove the deadline. We all know that these days legislation goes to Mitch McConnell’s Senate to die.

In the meantime, Virginia Attorney General Mark Herring, along with Illinois Attorney General Kwame Raoul and Nevada Attorney General Aaron Ford filed a lawsuit that will become the vehicle for deciding that question. Another lawsuit, filed in Massachusetts by Equal Means Equal, the Yellow Roses and Katherine Weitbrecht, argues that neither Congress nor the executive branch should have the power to set a deadline for the passage of a constitutional amendment and seeks the court to order the National Archives to properly record the ratification. A lawsuit opposing ratification was also filed in Alabama last year by the attorneys general of Alabama, Louisiana and South Dakota.

As per the ERA Coalition polling, 90% of Americans and 94% of millennials support the ratification of the Equal Rights Amendment.

So, what can we do now? We need to contact our Senators and urge them to support the legislation to remove the ERA deadline and pass Senate SJ Res 5. Contact your friends and relatives state and nationwide urging them to do the same. Sending thank you cards, letters or emails to legislators supporting removal of the deadline is also helpful.

Keep the fight going! Let’s get the Equal Rights Amendment ratified to the United States Constitution!

PHOTO: Members of Herndon-Reston Indivisible gather in January at a VA Ratify ERA rally on the grounds of the Virginia State Capitol in Richmond. / Photo by HRI member Bob Root.

The mission of Herndon-Reston Indivisible (HRI) is to mobilize a progressive network for resisting the Trump agenda while electing Democrats who support transparency, inclusion, tolerance and fairness.