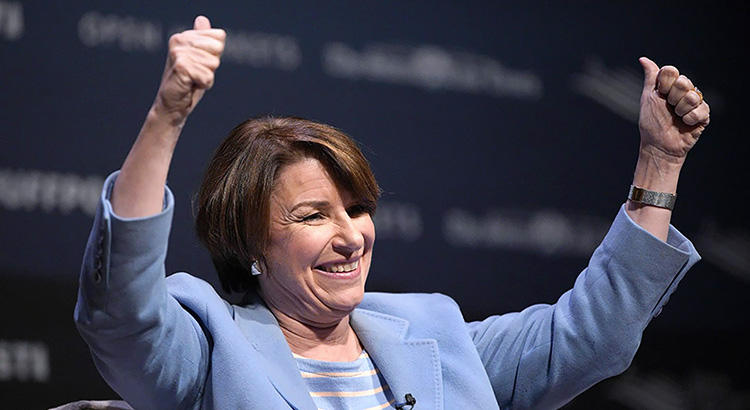 Editor’s Note: Another in our series of personal statements of support from readers for Democratic presidential candidates.

For the first time in my life a presidential candidate motivated me to jump in early and give all I’ve got to her primary campaign. I’d like to introduce you to Sen. Amy Klobuchar, the candidate described in the Washington Post as “Trump’s Worst Nightmare,” the one the Quad City Times declared, “is the one.”

Amy is a clear-eyed progressive with the experience to know how things work, the honesty to explain it to you, the courage to work with the opposition and the caring to motivate her to listen to and fight for her constituents … even those who voted against her.

I met Amy on my first day of work at Planned Parenthood of Minnesota when she was the keynote speaker at a special event. My new boss, a former adviser to Paul Wellstone (catchphrase: ”Always Tell the Truth!”), thought I’d enjoy meeting the first woman to win county prosecutor and a rising star in Minnesota’s Democrat-Farmer-Labor party. My boss was right, and I knew Amy would be one to watch.

These were during the Jesse Ventura years, a time when progressive Minnesota had suddenly turned sideways. Vibrant Minneapolis had been recently branded “Murderapolis” after a report showed the city had a higher crime rate than New York City. To see a woman of my generation breaking barriers and helping her city heal was exciting.

A few years later we moved to Virginia and I watched Amy’s career rise from a distance. I’d see her on “The Rachel Maddow Show” and cheered her Senate campaigns. When she announced her campaign for president, I immediately signed up to help. In Amy, I truly believe we have the ability to win, clean up Trump’s tragic, failed presidency, and accelerate progress for all Americans.

To me, the overriding outcome of this election is to heal our country. The first step must be to land our victory by uniting the votes of Democrats, Independents and Republicans. Amy is the only candidate with the track record of attracting Independents and moderate Republicans to do this. Her secret weapon? She likes people, actually likes and respects people. When she says, “I know you and I will fight for you,” it’s because she truly has walked the ups and downs of life’s path with so many Americans. She’s real.

Amy will be a phenomenal match against Trump. As his polar opposite she stands on moral high ground and as a woman she’ll present an interesting foil. Attacks on her will enrage and mobilize the suburban women predicted to carry the election. And she’s scandal-free.

I urge you to take a good look at Amy. You might have to do a little work to find her because her grassroots budget won’t buy the ads of other candidates, but here’s a good place to start: Amy’s First 100 Day Plan. And here’s another: amyklobuchar.com.

As the New York Times endorsement put it: May the best woman win.

Jane Miscavage is a member of FCDC (Providence), a community leader and co-founder of the Food Allergy Support Group of NOVA.