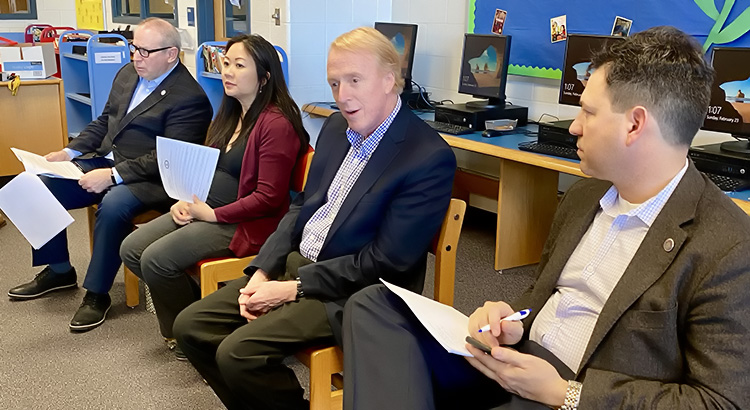 When asked about his vote, Surovell said he “does not personally support the ownership of weapons of war not needed for hunting or self-protection.”  However, he felt Senate members were not prepared to vote for the ban. In fact, there was no “companion bill” in the Senate. He said, “From my perspective, we had a bill that wasn’t going to pass. I had some questions about the bill. It needed some work but … even if it had got on the floor, it would have died there and would have continued a discussion going nowhere and wasted a lot of time.”

Surovell explained that he felt the time was better spent on the 20 to 25 other big policy issues which remain to be discussed in the two weeks remaining in the session.  He referred those attending to his blog and to articles that will appear in the “Washington Post”, “Connection”, and other local newspapers this week for further explanation.  Sen. Petersen has also defended his vote in Fox News media.

The full Virginia House passed an assault weapon bill on February 11, by a narrow margin, 51 – 48, along party lines. That action moved the bill, sponsored by Delegate Mark Levine (D-45th) to “crossover” to the Senate, where it was assigned to the Judiciary Committee.  The committee voted to carry over the bill, HB961, until the 2021 session, by a vote of 10 -5. Those committee members voting to support of the bill were Sens. Dick Saslaw, Louise Lucas, Jennifer McClellan, Jennifer Boysko, and Joe Morrisey.

Surovell reminded constituents in his blog that much progress was made on gun control during the 2020 session. “We have made significant progress on firearm violence prevention.  We have passed (1) universal background checks, (2) reinstating Virginia’s “one-gun-a-month” purchase limit, (3) emergency risk protection or “red flag” orders, (4) authorizing local governments to regulate guns in public buildings, parks and events, (5) allowing firearm forfeiture during protective order proceedings, (6) banned bump stocks, and (7) increased penalties for child access.  Legislation to broaden the crimes that surrender firearms rights to misdemeanor stalking and sexual battery is pending along with my voluntary Do Not Sell List legislation.  Passage of these bills is unprecedented and historic. “

Assault style weapons gained infamy as the weapon of choice in several mass shooting episodes, spurring gun control activists to seek bans or other limits on their sale and use.  Sen. Levine’s assault weapon ban was included in the package of bills planned for introduction in Gov. Ralph Northam’s special general assembly session on gun control in July 2019 following the mass shooting in Virginia Beach. The special session was quickly shut down by the GOP-controlled legislature less than two hours after it convened, hearing no gun bills.  With the change in party control this session, gun measures are among several issues that have found better reception from lawmakers.

Susan Laume is a member of the Springfield District Democratic Committee and director of the Virginia Dog Army, an animal advocacy group. She and her dog work as a therapy dog team.