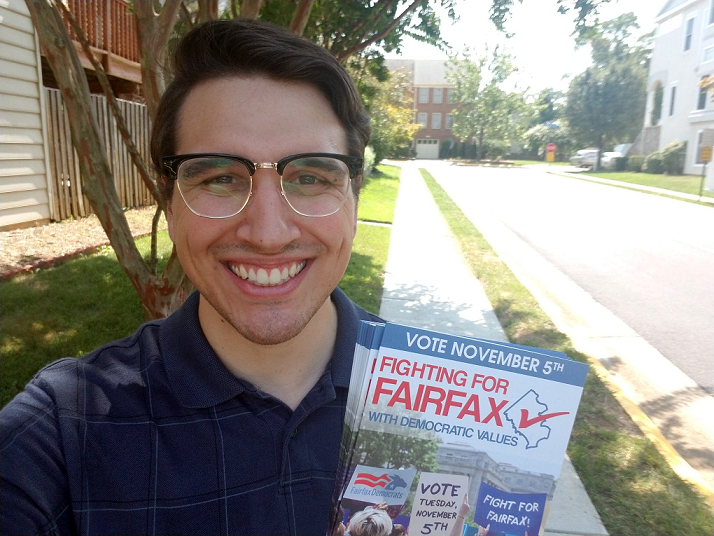 Meet Jack Kiraly, the new Executive Director of Fairfax County Democratic Committee. As FCDC’s only paid employee, Jack is in charge of making the complex machinery of this large (900+ members) volunteer organization run smoothly. With elections every year, FCDC is constantly planning or executing on strategies to contact, register and educate voters, to get out the vote on election day, to protect voter rights, and to raise funds to make all this happen.

The Blue View asked Jack to take a few minutes out of a busy day to tell us about himself:

I’m proud to say I started working in Democratic politics in the 2008 elections, volunteering with the United Auto Workers in Michigan.  But I’ve been engaged in politics my whole life. It was a part of my upbringing. Every election day, I remember walking to our local polling place with my parents. It was ingrained in us to vote like our lives depended on it. And that’s because it did.

Both of my parents are members of UAW Local 600. My grandmother is a retired organizer and negotiator for the UAW, and my grandfather is a retired Teamster. I had daily “aha” moments, growing up in the union halls of suburban Detroit.

Conservative policies and “trickle-down economics” gave working people the short end of the stick. When  the Detroit metro region fell on hard times, Republicans were more than willing to “let Detroit go bankrupt,” while Democrats rolled up their sleeves and put in the work to save the millions who depend on the auto industry.

Beyond the better wages and benefits for my family, the union instilled in me a sense of public service and the value of solidarity with working people and marginalized communities.

Prior to this, I worked in a number of different roles, including as support staff to clinical trial research, organizer for science and space policy advocacy, research assistant for a documentary series, and staffer for various campaigns.

In the fall of 2018, while working for People for the American Way, I met now-Commonwealth’s Attorney Steve Descano. We hit it off immediately, and I became his campaign manager.

I built out a campaign that leveraged grassroots power to win the first primary in Fairfax County for the commonwealth’s attorney position in 56 years, and defeat a Trump political appointee, Jonathan Fahey, in the general election. Through this experience, I became familiar with FCDC and the political landscape in the county.

I’m constantly surprised by the volume of people who come through the front door to help. I knew from my experience on Steve’s campaign that the committee runs on volunteer power, but I didn’t fully realize just how many people are involved. That support system is what keeps me on task and helps this place run smoothly. So, to all of our volunteers and folks who offer their help: thank you.

I’m originally from Dearborn, Michigan – the birthplace of American manufacturing and the labor movement. I moved to the DMV area in 2011 to attend American University for college and grad school. Immediately upon arriving, I got involved in local politics, working in DC, Maryland, and Virginia over the years.

It’s funny – I distinctly remember the fall of 2011, taking day trips out to Fairfax from Tenleytown, knocking doors for Pam Danner, Dave Marsden, John Foust… and everyone else I could.  To come back after all these years, it’s poetic.

In terms of hobbies, I play in a punk rock band with a couple of good friends, I am on the board of Justice Forward Virginia, and have been actively involved in space advocacy since 2013. On that last item, I hold a master’s degree concentrated in space policy, and I have worked with names such as Bill Nye, Robert Picardo, and Buzz Aldrin on a number of advocacy projects to expand public knowledge and support for space exploration.

No question, Franklin Delano Roosevelt. The policies he implemented over the course of his presidency, the battles he fought and won, and the legacy of progressivism he left behind continue to inspire me, especially in this trying time under the “orange menace.”  To me, FDR set the high water mark for what a president can achieve, and the difference that Democratic policies can make in the lives of working people.

Working to elect Democrats, advocating for progressive policies, and gazing at the stars.