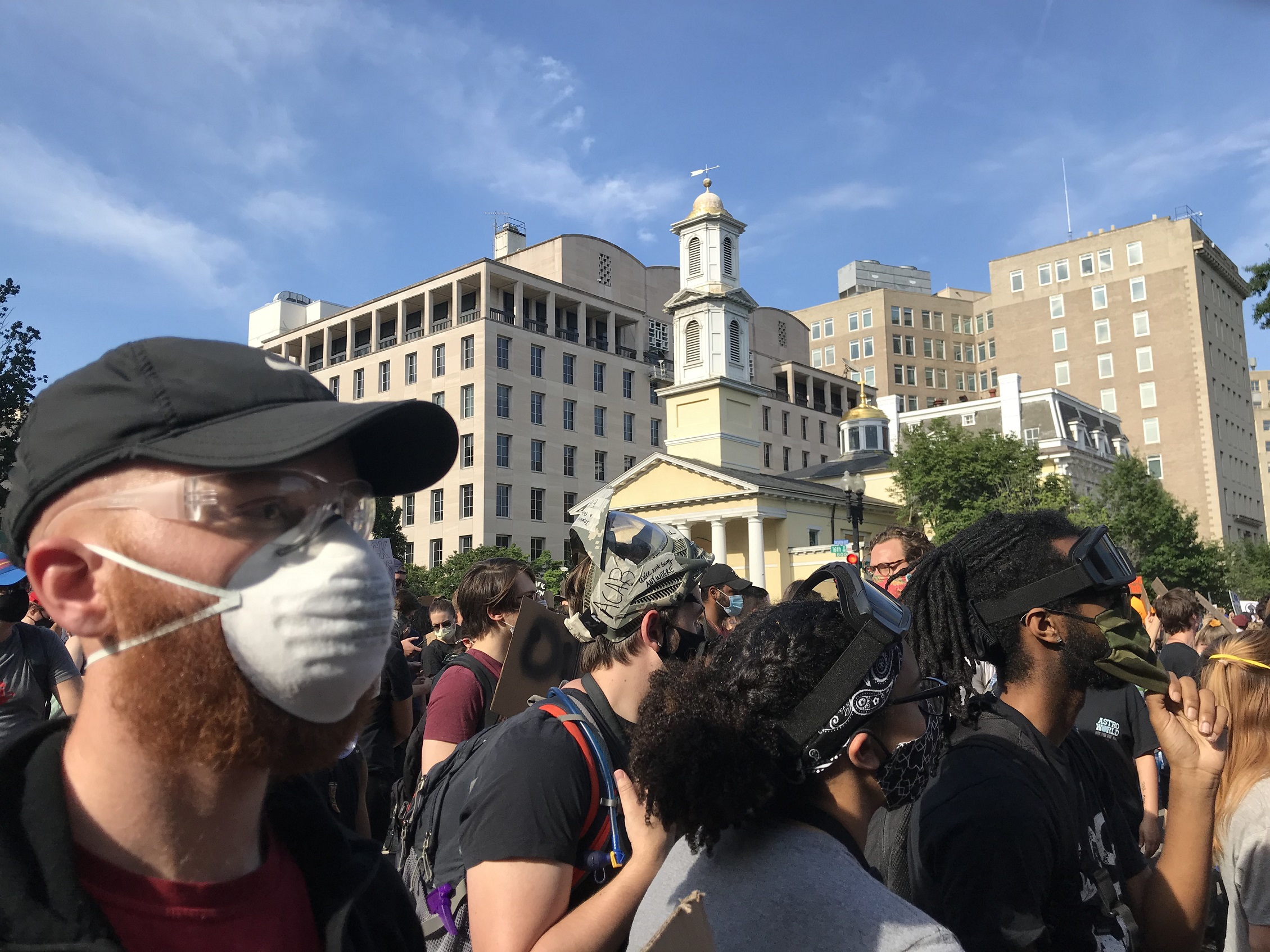 My son’s text decided me. “If you wanted to go, I would say today’s the day.”

The previous night, he had been caught in the unprovoked rush of police out of Lafayette Square to clear a space for Trump’s photo op at St. John’s Church. He had not been injured but shared the outrage of millions at this latest attempt by Trump to take partisan advantage of the protests over George Floyd’s killing.

My son, Jay, expected there would be a righteous mass of protesters the next day, Tuesday, June 2. He would return, with his wife and two children, and he knew I appreciated his example of the previous night. So he sent the text that set my plan in motion.

Another son, Steve, is visiting this week and he decided to join as well.

Our decisions were complicated, of course, by the heightened risk of covid infection. Although the adults wore masks, keeping masks on an infant and a two-year-old would be a hopeless task. And social distancing at a large demonstration massed into a small space equally so.

Steve and I conferred with our Significant Others (fiancée and wife, respectively) and obtained their blessing.

After all, if any event justified a heightened risk of sickness, it was this.

The six of us gathered at Jay and Diana’s place in Georgetown and walked the mile and a half to the White House. When we arrived, in mid-afternoon, the crowd was sizable but orderly.

Jay, Diana and the kids left before curfew at 7 pm, but Steve and I stayed stayed some time after.

I have never seen such a well-behaved, yet passionate, demonstration. Chants –  such as “Say his name! George Floyd!” and “No justice, no peace! No racist police!” – were shouted repeatedly at ear-splitting levels. Yet at intervals some unseen leader would initiate a movement and a wave would pass over the crowd, extending for blocks, as we all sank to one knee and remained, pensive, for a few minutes.

Being in a mass of thousands of people going from raucous calls and animated gestures one moment to silent reverence the next was the closest I’ve come to feeling spiritual in a very long time. It was a fitting tribute to Floyd, Breonna Taylor, and other black fellow Americans unfairly killed by police.

The police we had in mind at that point numbered about 60 and were gathered in a line behind a temporary 10-foot high chain link fence separating us from Lafayette Square.   A few hotheads screamed insults at them, but when they began shaking the fence – which was only held in place by loose metal pads — cooler heads prevailed. “Don’t give them an excuse to shoot!”

Although some experienced hands gave us bottles of mixed water and milk of magnesia in case of tear gas, the police restrained themselves, even as curfew officially began.

The protest – much larger than any of the previous days  — accomplished the objective. It showed that thousands of angry people can join to show their outrage without losing control and providing an excuse for a vindictive president to repudiate their good faith. It showed the power of a non-violent response to  brutal racism – sadly, as necessary now as 50 years ago.

One of the chants expressed it best: “This is what democracy looks like!”

Brad Swanson is the editor of The Blue View. He can be reached at: newsletter@fairfaxdemocrats.org