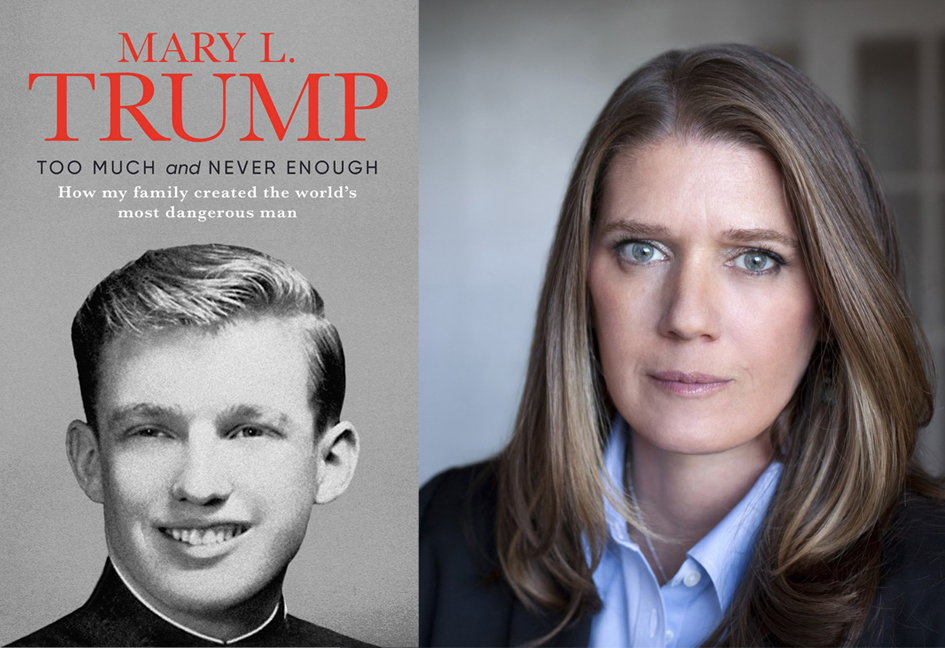 If all one knew about this book originated with headline-grabbing excerpts about Donald Trump, you might expect it to be only an insider’s tell-all full of juicy tidbits.  You’d be mistaken but hardly disappointed.  The author is Mr. Trump’s niece, the daughter of Donald’s older brother Fred Trump, Jr. Mary Trump grew up seeing the destructive effects of Fred Sr. not only on her father but on the entire family.  The book, published on April 14, 2020, has sold millions of copies.

By all accounts, Fred Trump, Sr. was a dictatorial figure obsessed with his namesake (Fred Jr.) taking the reins of the family business.  He was a workaholic who saw success (read: money) in business as the sole measure of achievement.  His dominance of the family business and his expectations for his family played a major role in his eldest’s son’s early death from the effects of alcoholism.

Mary Trump brings a keen perspective to this family tale.  One might expect that traumas like her parents’ divorce and father’s death would translate into emotive storytelling.  She writes with a trained psychologist’s observations and analyses, lending gravitas and rationale to her account of her childhood experiences.  Her recollections aren’t limited to the years preceding her father’s death. Her infamous uncle’s legal interactions with her and her brother regarding her father’s inheritance are well documented.  It’s also clear that she had lengthy conversations with her aunt, Donald Trump’s sister, which confirm Ms. Trump’s perceptions and knowledge of family activities.  Based on her training and observations she concludes that Donald Trump is deceiving, manipulative and manipulated – and that the country has suffered from the same toxicity which was inflicted upon him by his family.

“Too Much and Never Enough” is also an intimate, but brief, biography/memoir of Ms. Trump, her father and her family.  Interwoven with the details of her grandfather’s cruelty are memories of her childhood when her father and his young family were happy, most often when Fred Jr. was able to escape his father’s control.

It’s clear that Ms. Trump researched her material well.  Her public statements about her book, her family and her feelings about her infamous uncle might have implied some personal animosity toward him.  That doesn’t permeate the book, which provides a balanced perspective that makes every word easy to believe.  Trump’s book subtitle (“How my Family Created the World’s Most Dangerous Man”) is a strong indication of her opinion of Mr. Trump and where the blame belongs.

The author’s unique insights go far in helping us all understand the personality of one of the worst American officials in our history.

Michele Menapace is a member of Lee District and also a member of the National Affairs Committee of the Fairfax County Democratic Committee (FCDC).