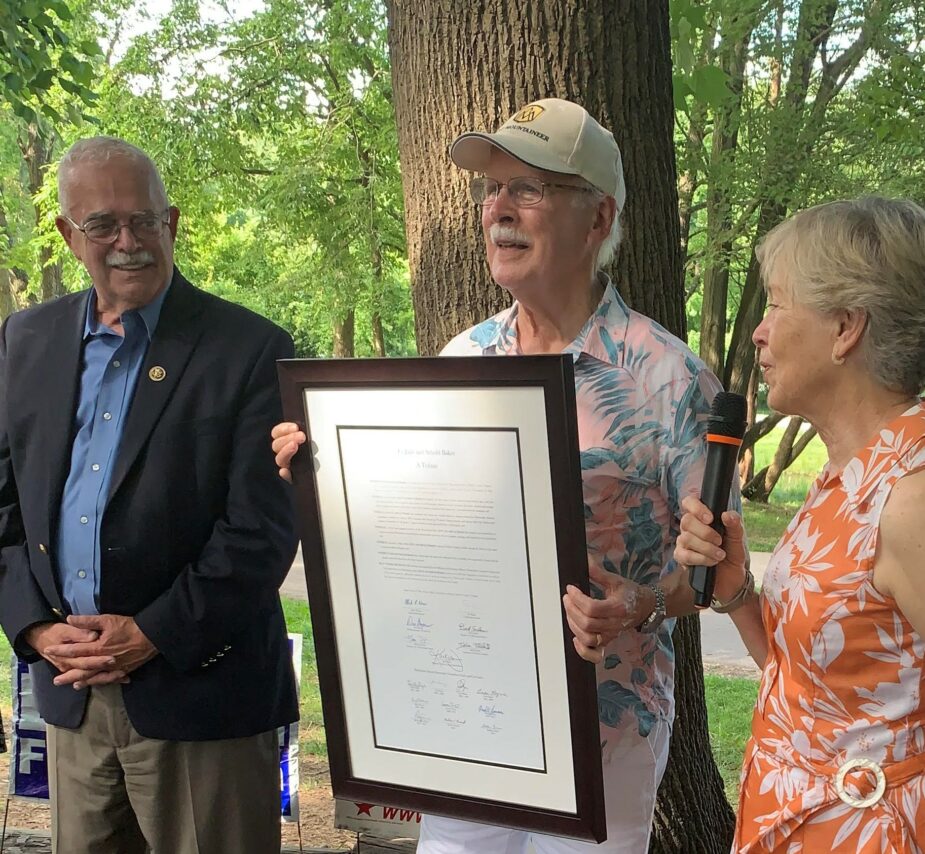 After two decades serving as precinct co-captains at the helm of Providence District’s Graham-Greenway precinct in Fairfax County, Judy and Arnold Baker are stepping down. As a testament to the seminal role they played in helping turn Fairfax a deep Blue, the Providence District Democratic Committee (PDDC) honored them with a tribute at the committee’s annual Summer Solstice celebration on June 27. The tribute was printed and signed by all the elected officials who represent the Bakers in Washington, Richmond, and Providence District (among them Senators Mark Warner and Tim Kaine, and Congressman Don Beyer), as well as by all ten individuals who served as PDDC chair or co-chair during the Bakers’ long tenure. “The Bakers richly deserve that tribute and more,” says Holly Hayes who, as the PDDC lead at the time, recruited the Bakers in the year 2000. “They not only performed their role exceedingly well and with passion but always with great humility.” No role is more central to an effective grassroots political campaign than that of precinct captain. The captain helps marshal the precinct’s resources to carry out the myriad tasks on which successful campaigns depend – everything from arranging get-togethers with candidates and voters to recruiting volunteers for phone banks, literature drops, door-to-door canvassing, voter information stations at the polls, and much more. Whenever a Democratic volunteer steps up to fill that role, it’s a great day for the precinct, for the district, for our Party, and ultimately for our nation. When two such volunteers team up and serve as long as the husband-wife team of Judy and Arnold Baker did, the benefits are immeasurable. In Virginia, as regular readers of The Blue View well know, we have elections every year, making the precinct captain’s job all the more challenging. The Bakers’ tenure spanned dozens of electoral contests from 2000 through 2020, including general elections, primaries, and special elections. To have tended just their own precinct’s flock for two decades would have been impressive enough, but the Bakers went further, essentially becoming “Democratic campaign central” for the cluster of precincts neighboring their own and beyond. Those who benefited from the Bakers’ largesse are legion.

“[The Bakers’] work as Precinct Operations leads for their east region of Providence really spanned the entire district, as they served as mentors for the other precinct ops leads,” says Carrie Nixon, who chaired the PDDC from 2008 to 2011. “I learned a lot from them myself about what it takes to set up a truly local and truly effective ground game for winning an election.… [The] Obama ’08 Field Ops campaign staffer for our area practically lived at their house. I’m certain they actually taught him all he needed to know about a successful field program.” “I relied on the Bakers a lot to help and mentor the other inside-the-Beltway precinct captains,” remarks Paul Jameson, who led PDDC from 2011 to 2017. “I found myself at their home quite often to pick stuff up or drop stuff off or to participate in their house parties.” Filling the Bakers’ big shoes will be a daunting challenge. Luckily for the district, neighbors Abby Sugrue and Duane Ludwig have teamed up to try to do just that. Their fellow Providence Dems are delighted that Abby and Duane are stepping into the breach. We wish them the very best and will support them in working toward continued electoral successes. We also wish the Bakers serenity in their “retirement,” although we know they will continue supporting and inspiring our Providence and Fairfax County Democratic families for many more years to come.

The author had the opportunity to engage the Bakers in conversation some days after the tribute and to ask about their experiences helming Graham-Greenway precinct. A condensed version of that conversation follows below. Marin: When you agreed to become co-captains, did you anticipate that you might continue in that role for two decades?

Bakers: Our commitment was open-ended. Both of us retired in 2000, Arnold from a federal job and Judy from a management position at Marymount University. While employed, our jobs had limited our freedom to express our political views. Both of us were therefore thrilled that, now retired, we would be able to put our shoe leather to work for our political values.

Marin: You took part in dozens of political campaigns and elections. Which particularly stands out, and why?

Bakers: The first Obama campaign, in 2008. We were constantly hosting door-to-door canvasses from our home. “It looks like all the riders from the Metro station at East Falls Church are coming up our driveway,” Arnold said at one point. There were also volunteers in our house doing phone-banking and data entry, and both of us were continually training volunteers. We even had a group of three or four students from England turn up. They said, “We’ve got to go back home for our final exams, but we’ll come right back here after that [to continue volunteering]!” For the work we did in the 2008 campaign, the following year we were named Volunteers of the Year for all of Fairfax County.

Marin: What, in your view, are the most challenging or demanding aspects of being precinct captain?

Bakers: Recruiting volunteers. We were always able to collect lots of emails from prospective Democratic voters. But people are busy, and typically only a dozen or so would turn out to do some work. Plus, door-knocking can appear intimidating. We would always encourage unseasoned volunteers to go door-knocking with us until they developed confidence to go out on their own. We also enjoyed working at our voting precinct during primary elections because we got to talk with prospective Democratic voters face-to-face, get them engaged, and get them to attend events. After Trump was elected it became easier to enlist volunteers. He was a great recruiting tool for us!

Marin: Many volunteers are reluctant to become precinct captain because they think the job is too onerous. You have mentored many other precinct captains throughout the district. What’s your feeling on that question?

Bakers: For some, that may be the case. But the job need not be onerous. The secret is to share the load. We were able to do so much more because we divided the tasks between us. We were fortunate to recruit Abby Sugrue and Duane Ludwig to succeed us as co-captains (they’re both married, although not to each other, as we are). But if you don’t have a co-captain, you can always find someone else in your precinct willing to help; just reach out.

Marin: What parting words of advice would you like to offer our volunteers (and voters)?

Bakers: Two thoughts: First, that every election matters! It makes a big difference to our communities who we elect to represent us on our school board, in Richmond, and in Fairfax County. The second thought is that each of us can do something to help elect Democrats: You can canvas; make phone calls; attend events; write a postcard to a neighbor; or help with so many other tasks. Also, if you can, make a donation. But most important, vote – in every election!