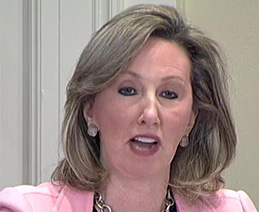 Ideas once on the furthest extreme of the American political system have become mainstream in the Republican Party. Yesterday’s “extremist” is today’s “moderate.” Barbara Comstock is a poster child of this problem. For anyone thinking about decades of American politics, Va. Del. Comstock, R-10, can only be called an extremist.

–In the pocket of the NRA with consistent votes against even the most mild efforts to constrain anyone’s access to deadly weapons.

–A key player in the Clinton Impeachment with a long history of political dirty tricks.

–Gets 100% scores from anti-abortion, anti-LGBT rights, and anti-equal pay groups.

Comstock only appears moderate because the Republican Party and its supporters have worked consistently for several decades to shift the “Overton Window” of acceptable discourse far to the right.

One of their success stories: the evisceration of the estate tax (rechristened the “death tax”)  by a group of some of America’s richest families, who spent millions on propaganda so that they could avoid billions of dollars of inheritance taxes (and not have to pay for the societal infrastructure that enabled them to get rich).

In today’s Republican Party, it is no longer extremist to embrace neo-Nazis, eliminate basic health protecting regulations or hold hateful attitudes toward immigrants.

Meanwhile,  the Democratic Party, writ large, has remained more or less as it has been since the mid-20th century, with diversity between moderately conservative and liberal, with essentially no truly radical left-wing major politician.

Unfortunately,  journalists and political observers (often without realizing) are constantly normalizing – for example, representing both Democratic and Republican views on climate policy as equivalent when one is based on science and facts while the other is driven by ideology.

Barbara Comstock benefits from this normalizing. As she hasn’t shown the utter lunacy of the radical extremist wing of her party, she gets credited for being a “moderate”. But in fact Comstock’s political history and voting record is extremist by any rational perspective, and she hides from environments (such as town halls) where her real views will be made clear to all.

Barbara Comstock may be in the center of her party, but that party’s lurch to the far right means only one thing: she is an extremist.

Adam Siegel lives in Fairfax County and is involved in many community activities from citizen boards to youth sports. He writes on energy/climate issues and on politics for BlueVirginia.us.