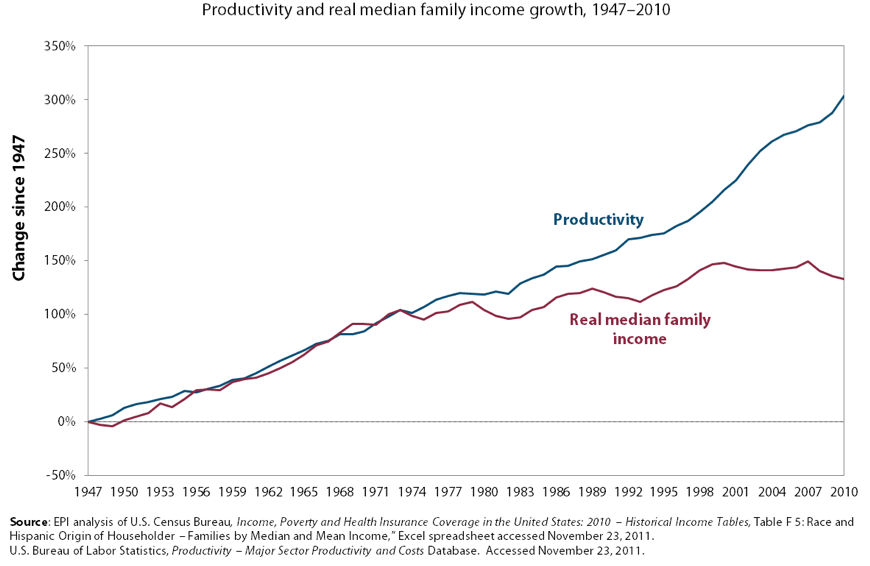 Tax reform is not a zero-sum game. Since Ronald Reagan lowered taxes in the 1980s, followed by George W. Bush in the early 2000s and Donald Trump last year, middle class income has stagnated despite productivity increases, and overall economic growth has been mediocre. Instead of lose-lose, we can have win-win, bolstering both fairness and economic growth through sensible tax reform and wise investment of added revenues.

Fairness in taxation means finding the right balance between the taxpayer’s ability to pay and the benefits from government use of tax dollars.  As I showed in a previous article government investment in education, research, and infrastructure could hugely benefit economic growth and good jobs.

The rich are not paying their fair share today. The chart accompanying this article the Economic Policy Institute shows the growing gap between median family incomes and the value of goods and services that a worker creates. Since 1980, the additional value added by each worker has gone more and more to bosses, not employees

Eliminating the Republican-passed tax breaks for the wealthy, and publicly investing the revenues would create better paying jobs, and help close this gap.

Looking only at unnecessary and unfair tax favors to wealthy individuals and families, three tax breaks stand out for targets for reform. Cutting these would raise an estimated $4 trillion over 10 years without material harm to the rich.

How can Democrats convince voters that increased taxation is needed to fully support needed public investment, as well as economic security programs such as health care and social security?

We need look no farther than Bill Clinton, who got it right in 1992 when he ran and won on the promise to “make the rich pay their fair share”. Clinton was blocked from further tax increases after 1994, so rich still gained disproportionately. But still, under Clinton we had the best economic growth in recent times, and median incomes actually grew.

The facts are on the side of fairer taxation and more public investment—we just need to deliver the message.

William Berkson is a member of Hunter Mill District Democratic Committee and chair of Herndon Reston Indivisible’s Economics Committee. A PhD in Philosophy, he is author of four recent articles on political economy in Washington Monthly