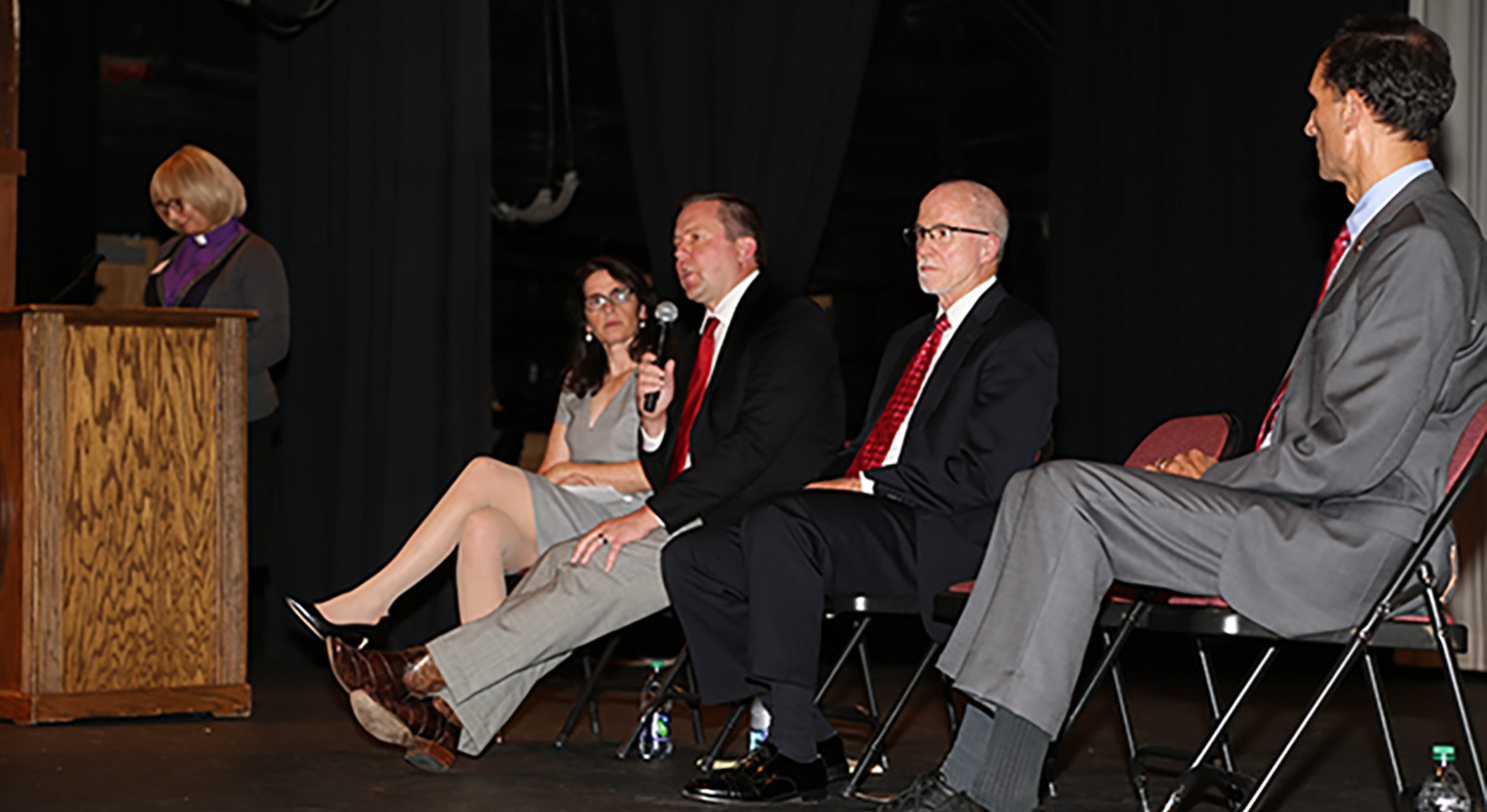 Virginia’s candidates for U.S. Senate Tim Kaine and Republican Corey Stewart have different takes on climate change: Sen. Kaine believes that human activity is causing significant climate change and we have an obligation to do something about it. Stewart believes the climate has cycles and we can’t change it.

Both Sen. Kaine and Stewart, Chairman of Prince William County Board of Supervisors, separately discussed their views on climate change at Tuesday’s Virginia Climate Crisis Forum in Vienna, hosted by Faith Alliance for Climate Solutions. Kaine was present for the first part of the forum and panel discussion and Stewart participated after Kaine left.

Kaine said that you can see the effects of climate change in Virginia every day. Examples he mentioned were Olde Towne Portsmouth where beautiful old homes frequently have water in their first floors due to normal tidal action and the storm surge that swamped Hampton Roads during and after Hurricane Florence. He said it’s important to pick politicians who believe in science.

“This administration, because this president believes climate science is a hoax and wants to undo policies that President Obama was associated with, has made a number of foolish moves,” said Kaine. “It was wrong to back out of the Paris Agreement. The good news is that many nations, many cities, many states are keeping with it and I’m confident the United States at one time will rejoin.”

Kaine said it was also foolish to roll back the CAFE (Corporate Average Fuel Economy) standards requiring higher miles per gallon and lower emissions for vehicles. “I will join with Senate colleagues to try to reverse this bad decision,” he said.

Yet another foolish decision Kaine mentioned was turning away from the Clean Power Plan, an Obama administration policy to set the first-ever national limits on carbon pollution from power plants.

Moderator Rev. Dr. Jean Wright said that the latest data shows that 87% of Virginians believe in climate change. She said she recently read something about the Trump Organization, which owns a golf course in Ireland, being so concerned about sea level rise that they applied to build a 20-foot sea wall stating in their application that it was due to climate change.

“There’s a wall that we could say there’s justification for,” said Kaine.

When Stewart took the stage, he had his own take on rising sea levels. “With regard to the sea level rise, the reality is that between 1950 and 1970, Virginia began a rapid increase due to improvements in pump technologies, a rapid reduction in the amount of ground water that was being taken out of the Virginia coastal aquifer and as a result, the water level went down and the ground began to compress,” he said. “The land, yes, it is sinking compared to the level of the sea but it’s not so much the level of the sea increasing as much as it is a matter of the actual ground subsiding. This is a scientific fact.”

The boisterous reaction to Stewart’s ground subsiding comments prompted moderator Wright to come up to the stage and remind the audience to be civil and show respect.

“Yes we need to fix this problem,” Stewart said. “But let’s focus and put our money where we can most directly address the impacts of that change whether working with the Army Corps of Engineers or water conservation. These are practical solutions to fix this and that’s where I hope that we can agree to work together in the future.”

1 thought on “Kaine, Stewart on opposite sides on climate change”