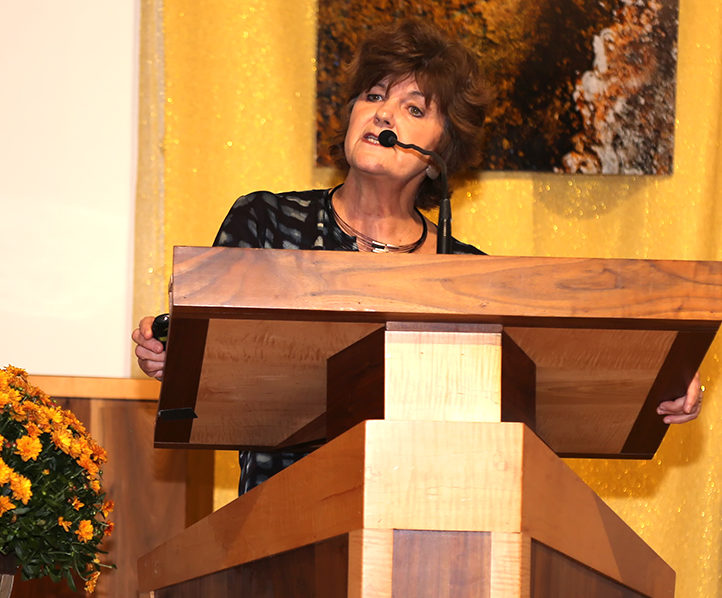 Prominent historian Nancy MacLean warned Wednesday night that America faces an “existential threat to democracy” from a secretive plan by right wing plutocrats led by Charles Koch to subvert our political institutions and undo a century of social progress.

MacLean, author of the prize-winning book Democracy in Chains: The Deep History of the Radical Right’s Stealth Plan for America, said that Koch coalition was winning its campaign to turn back the clock to an era where corporations were unfettered, unions powerless, and social security nonexistent. She quoted Charles Koch, the industrialist funder of many libertarian political organizations, as saying that he had achieved more in the last year than in the previous 10 – and more in the last 5 years than in the previous 50.

MacLean, a Duke University history professor, was speaking to an audience of about 150 at a book talk at the Unitarian Universalist Congregation Fairfax, sponsored by The Blue View, the online news magazine of the Fairfax County Democratic Committee.

MacLean explained that Koch is at the center of a group of wealthy radical libertarians who believe that government should withdraw from many social functions that it has acquired over decades—even though large portions of the population would suffer. The Koch view, she said, is that “predators” or “parasites”  – recipients of government benefits – are taking valuable resources from businesses that create wealth. If the parasites are not stopped, they will eventually destroy the productive capacity of the economy. If the result of unrestrained laissez-faire is that few rise while many fall, that is an unfortunate but necessary outcome.

In order to achieve legislative power to enact these goals, the Koch coalition promotes voter suppression and gerrymandering, MacLean said. They have taken over control of the Republican Party by spending heavily on favored candidates in primaries, taking advantage of lax campaign finance laws to disguise the source of the expenditures.

The Koch strategy has distorted the political landscape almost beyond recognition, said MacLean. “The old labels don’t work anymore,” she said. Despite her support for the anti-Koch liberal cause, “I feel like a conservative – because I want to conserve the social gains of the 20th century.”

MacLean said the Koch coalition also exercises influence covertly through a myriad of think tanks and lobbying organizations whose common funding and ideological base is not widely known. These organizations include Heritage Foundation, Cato Institute, American Legislative Exchange Council and numerous others – including several at George Mason University (GMU) such as the Mercatus Center.

MacLean said the Koch ideology aims to dominate not only classroom curriculums and legislative agendas but also the justice system. Supreme Court nominee Brett Kavanaugh is a favorite of the Koch interests, she said.

The culmination of the “long game” played by the Koch alliance over decades, said MacLean, would be the convening of a constitutional convention at which the libertarians would seek to embed their radical policies and roll back the 17th amendment to the Constitution, so that senators would once more be elected by state legislatures – which are more easily controlled by Koch partisans – instead of the people.

Article V of the Constitution allows for such a convention upon approval by 2/3 of the states. It has never happened before, but as of now 30 of the 34 required states have approved the idea, MacLean pointed out.

MacLean said that liberals and even “Eisenhower Republicans” who don’t support the radical program of the Koch group must recognize that we are in an “all-hands emergency”. The majority of the American public support the social programs that government now runs, she said. By exposing the stealth plan of the radical libertarians and banding together to defeat their proposals, a constitutional crisis can be averted. “We, too, have to start thinking long-term,”
she concluded.

Brad Swanson is the editor of The Blue View. He is an international investment manager and previously worked as a diplomat and journalist