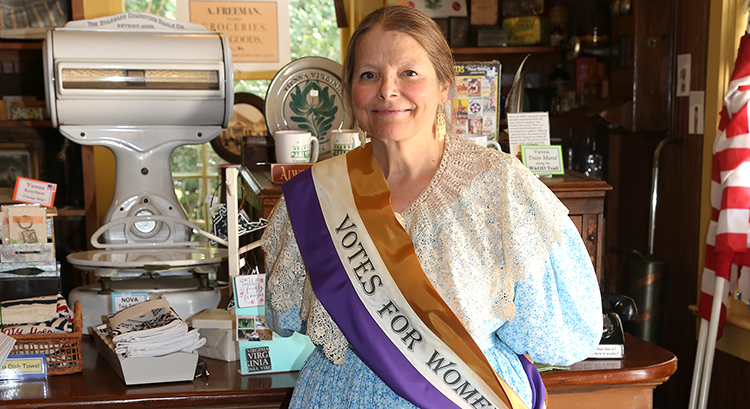 The fight for women’s rights is urgent. Who better to discuss it with than 203-year-old Elizabeth Cady Stanton, the famous suffragist leader?

While Elizabeth is long gone, the next best thing is right here in Vienna, Va., where Leigh Kitcher brings her to life frequently at afternoon teas, a women’s rights editorial cartoon exhibit and other events at the historic Freeman Store & Museum.

Kitcher, who re-enacts Stanton with a period dress and a  “VOTES FOR WOMEN” sash, sees parallels between the 19thcentury women’s rights struggles and the present day — with a sexist  Donald Trump in the White House and Brett Kavanaugh having ascended to the Supreme Court despite sexual assault allegations.

While women rally to keep the gains they’ve made, and to push for more, they should draw inspiration from Stanton, said Kitcher. “We need to be vigilant and understand what rights are important to us. What rights are you taking for granted? What rights can you not even imagine living without? All the things Stanton wanted women to have the right to do. It’s important to vote your own conscience and to have your own opinion.”

Kitcher points out that Virginia can breathe new life to the Equal Rights Amendment if it becomes the 38th state to vote for the amendment next year (see related story in The Blue View).

Stanton, born Elizabeth Cady in 1815, started agitating for women’s rights from an early age. Kitcher tells a story of a very young Elizabeth cutting out laws against women from a law book owned by her father, a judge. Her father told her that wouldn’t work because the laws were in all law books, not just his!

Stanton was educated by her father alongside his male law clerks. She recognized that laws hindered married women from owning property, keeping money they earned, divorcing, and keeping their children from being taken away from them. Men ruled as heads of households.

Elizabeth married Henry Brewster Stanton, a prominent member of the abolition movement, in 1840, and had seven children. She refused to be called Mrs. Henry Brewster Stanton, insisting on Elizabeth Cady Stanton. In 1948, she presented the historic Declaration of Rights and Sentiments at the Seneca Falls Convention on women’s rights, calling for the rights of women to own property, divorce, get an equal education and more.

Later, Stanton, along with Susan B. Anthony, founded the National Woman Suffrage Association and served as its president for 21 years.

Kitcher, a retired communications technology designer, comes to the Stanton role naturally. She says was paid less than men and her employer capitalized on innovations she pioneered but did not share the benefits with her.

“I loved the technology and felt privileged to be able to do the work,” she said. “Looking back on it, I wish I had more guts. I was afraid they wouldn’t let me continue to do what I loved. We still don’t have an equal-pay law.”

She recalls her mother saying she received lower grades in college, where classes were graded on a curve, so that returning World War II veterans could garner the As and improve their job prospects.

The Freeman Store & Museum at 131 Church Street in Vienna, Va.,is a Civil War-era general store, owned by the Town of Vienna and run by the non-profit Historic Vienna, Inc. Among its other programs, it hosts Afternoon Tea in its Parlor Room featuring special programs. The next tea will be the Holiday Tea on Dec. 7 and 8. For information on the types of teas offered in addition to the Suffrage Tea, or to schedule a private tea, visit their website.

Photo above story is of  Leigh Kitcher bringing Elizabeth Cady Stanton to life at the Freeman Store & Museum in Vienna, Va. / Photo by Karen Kirk.