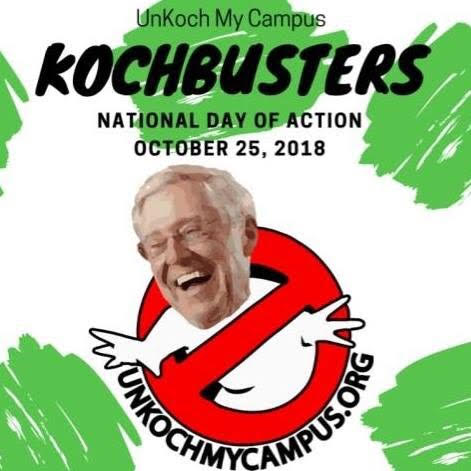 George Mason University (GMU) students delivered a 2,000-signature petition to the office of university President Angel Cabrera on Thursday demanding an end to influence by donors such as radical libertarian Charles Koch over academic appointments and course material.

The protest was part of a National Day of Action sponsored by UnKoch My Campus, an organization dedicated to exposing and repealing  “pay to play” gift agreements from Koch and other radical right wing donors that give them power to pick professors and shape the content of their research.

Koch has given GMU an estimated $50 million, and a total of $150 million to universities nationwide. Many of the agreements are secret but some have been revealed to give the donors an unusual amount of discretion. In the case of GMU, Cabrera admitted in April that some GMU donor agreements with the Kochs “fall short of the standards of academic independence”.

Since then, an Internal Review Committee at GMU found deficiencies in university policies regarding gift agreements.  Moreover, a GMU student group, Transparent GMU, has filed a lawsuit against a GMU foundation seeking full disclosure of gift agreements. The students lost the first round in Fairfax County Circuit Court, but have appealed.

Transparent GMU organized the protest Thursday, demanding that Cabrera release all GMU gift agreements and give faculty shared governance with veto power.  “Donor influence appears to have run unchecked for decades, and full transparency of all gift agreements is the only way to understand how deeply rooted the corruption truly is,” they said in an open letter.

Cabrera was not present when the students delivered the petition, and no response was given.

The students vowed continuing action until their goals of full disclosure and bolstered academic independence are met.

Brad Swanson is the editor of The Blue View. He is an international investment manager and has also   worked as a diplomat and journalist